Beyonce and Jay-Z Are Expecting a Baby 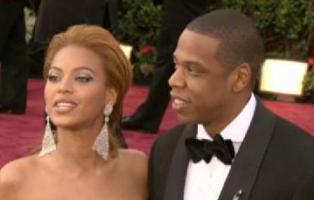 LOS ANGELES (AP) —Beyonce made a big announcement that practically upstaged the MTV Video Music Awards — and she did it without saying a word.

The 29-year-old superstar announced her pregnancy on the red carpet by cupping her stomach in an "I'm expecting" sort of way. Wearing a blond ponytail and flowing red gown, she used her hands to show the tiniest beginnings of a baby bump.

A publicist for the pop star confirmed the pregnancy to The Associated Press Sunday.

Beyonce and Jay-Z were married in 2008. This will be their first child together.

Jay-Z offered a (much smaller) surprise of his own Sunday: He performed alongside Kanye West on the VMA stage.

Beyonce took the stage herself later in the show, telling viewers, "I want you to feel the love that's growing inside of me."

At the end of her performance, she unbuttoned the sequined blazer she was wearing and rubbed her tummy on stage. The camera cut away to Jay-Z, who beamed a broad smile.