Hasan Salaam Speaks on the History of Black Music 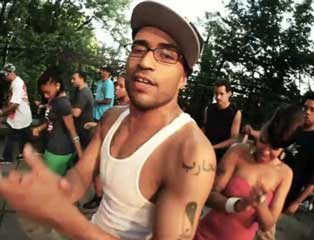 When Hasan Salaam thinks about the history of Black music, he relates it back to Okinawan martial arts. The style, practiced by the indigenous people on the Japanese colonized Okinawan Islands, was banned so it had to be practiced in secret. They would it look like a dance and fashion their weapons from common household and farming tools. By practicing in secret, indigenous people were preparing themselves for the day when they could rise up against their colonizers.

"That's what our music has been," says Salaam. "It's been the soundtrack to our struggle but it's also been the blueprint to our freedom."

The hip-hop artist, organizer and educator will be stopping at Portland State University on Thursday to perform and make a presentation on the history of Black music and its role in resistance. Portland is the latest stop on Salaam's current Northwest tour, which features his presentation "From The Spirituals to Hip-Hop: The Socio-Political Importance of Black Music in American Society."

Going back to the plantation, Salaam says spirituals like "Wade in the Water" and "Follow the Drinking Gourd" were examples of slaves using the Christianity that was forced upon them to deliver messages to one another. Practicing Christianity was the only time slaves were allowed to gather when they weren't working the fields, he says. In the case of "Wade in the Water," it told slaves lucky enough to escape the plantation to stay by the water so bloodhounds wouldn't pick up their scents.

Salaam notes that the revolutionary messages of the music have gotten less secretive over time, citing N.W.A.'s "F*** tha Police" as an example.

Although the boldness of the messages has changed, the conditions that created spirituals, blues, jazz, hip-hop, etc. have clear parallels, he says.

When Blacks were first brought to this country, masters and overseers would take their drums because they knew the instruments were tools of communication. Slaves responded by singing spirituals and playing the few instruments that were available to them, like the banjo. Following the Civil War and the brief period of Black economic and political prosperity known as Reconstruction, the emergence of Jim Crow segregation provided an atmosphere where Blacks couldn't help but sing the blues, say Salaam.

Hip-hop originated in the South Bronx. Up until at least 2010, the South Bronx was still the poorest Congressional District in the U.S. The combination of a lack of jobs, lack of educational resources, a railway being built through the neighborhood, white flight and landlords choosing to burn down their apartments rather than collect rent created the atmosphere where hip-hop would take form.

"That coal, the pressure made it into a diamond," says Salaam. "We're just some ingenious, making lemonade out of lemons people."

"It's all rooted in the same place. That call and response we do in hip-hop is the same as the field hollers that we use to sing on the plantation."

In addition to being a tool for direct resistance, Salaam says that the music was essential in simply helping people get through their days. The entertainment literally helped Black people get their pain out, he says.

A common discussion around hip-hop is that the genre has lost a lot of its revolutionary potency, similar to other genres before it. Nas famously released the album "Hip-Hop is Dead" in 2006 to explore the subject.

Salaam points to a history of co-option of Black music that seems to be replaying itself in mainstream hip-hop. He notes that minstrel songs were many white people's introductions to Black styles of music historically. The hyper-racialized performances by white minstrel performers did have the one positive effect of leading some white people to seek out the real forms of Black music that were being imitated, says Salaam.

While wearing Blackface is no longer acceptable, he says that labels still practice minstrelsy, albeit in a slightly more subtle way. For example, he points to Vanilla Ice and the way he was packaged during the height of his popularity in the 90s.

"I've sat with labels. They've told me, 'You can't have a song called Hezbollah. You can't talk about Blaxploitation.' But they'll sell you cocaine and Rick Ross fantasies all day. You don't see artists take names like Huey Newton. People are taking the names of things that destroy us. They're (the labels and affiliated interests like private prisons and law enforcement agencies) the ones that brought crack into our community in the first place so why wouldn't they find a new way to push it?"

When it comes to hip-hop, Salaam says fans have to look to where the people are putting out the music, not the corporations, to find music that isn't co-opted. He points to some of his contemporaries like Dead Prez, Immortal Technique and Jean Grae as examples of authenticity in the genre.

One of the things that has helped independent artists stay successful without major label backing has been establishing an international presence. Salaam says this has been a historical pattern in Black music, dating back to Jazz artists traveling to parts of Europe and not wanting to return to the U.S. The overwhelming sentiment, he says, was that the artists felt they were treated much better overseas. Also, there was a different level of appreciation for their art.

Salaam says this is still the case today.

"Everybody here is already ready for the next thing. It's such a microwave culture."

Salaam became the first U.S. hip-hop artist to perform in Guinea-Bissau two years ago as a part of his last project, the "Music is My Weapon" EP. All of the profits and proceeds from the album went towards building a school and a medical facility in the country. One of the things Salaam says he was most proud of with the project was that they gave people access to fresh water in their backyards. Previously, some people had to walk two and half miles for fresh water. He says he noticed a difference in the enthusiasm some fans displayed for the album, pointing to examples of people spending more than the $10 price tag for the sake of the schools. One person, he says, even gave him $100 and refused to accept any extra copies of the EP.

As an artist, Salaam says he loves telling the stories behind music, which is why he enjoys the "From The Spirituals to Hip-Hop" lecture so much.

Hip-hop specifically, he says, needs to have a place in academia.

"I think it's important we do have our music in an educational form and in a collegiate place where people can say these are great minds," says Salaam. "Rakim's lyrics are genius. We should study these in the same way we study Shakespeare."

According to him, the way in which hip-hop isn't given its proper intellectual due is reflective of a larger atmosphere that negates the genius of Black culture. He notes that stereotyping leads some to believe that musical talent comes naturally, when in reality, it was born from struggle and an individual's particular genius.

"I feel Black America has created the most popular music in the world except for Reggae," says Salaam. "The blues, jazz, rock and roll, soul, house, disco, hip-hop, go-go, funk. All of these things that came out of our struggle have inspired people all over the world. I think a lot of times, people don't realize that this is born out of struggle. Charlie Parker's life story isn't all happy. There's a lot of tragedy. It's that tragedy that made his genius flourish even more. A weaker human being couldn't have gone through what Charlie Parker went through and still made such brilliant music.

"A lot of people in our community don't know the history. It's important we spread and teach. That's how it starts being, 'Elvis Pressley was the King of Rock' because people don't know about Little Richard, Chuck Berry and Ray Charles. It's important we write down our history, not just in the oral tradition of Africa, so we can pass it around."

Salaam will be presenting "From The Spirituals to Hip-Hop" at PSU's Smith Memorial Student Union at noon on Thursday. His new album "Life in Black in White," is slated for release this summer. For more information go to hasansalaanmusic.com or follow him @hasansalaan on Twitter/Instagram.