Book Documents the Big Easy's 'Year Before the Flood 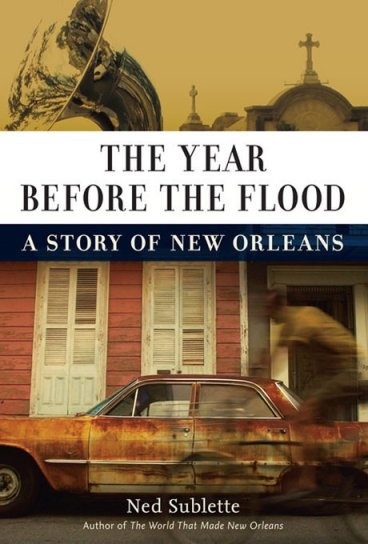 NEW YORK (AP) -- Hurricane Katrina gave Ned Sublette a dramatic coda for his memoir "The Year Before the Flood."
The book documents the last year that New Orleans and its thriving music scene were still fully intact before the city was nearly washed off the face of the Earth.
It's a tale full of foreboding.
"I was convinced I was seeing something imperiled," said Sublette, 58, in a phone interview. "It was clear something would happen. I just didn't know when or that it would be a 30-foot (9-meter) wall of water topping the city levees, and that after a catastrophic flood the survivors would be left to rot."
The singer-songwriter, who spent decades playing in the downtown Manhattan rock scene and releasing Cuban music with his groundbreaking Qbadisc label, moved down to New Orleans in 2004 to work on another book, "The World That Made New Orleans: From Spanish Silver to Congo Square."
His arrival in the city stirs up old memories of his youth in Louisiana and a newfound ambivalence that courses through his memoir.
"The only reason you put up with living in New Orleans is you get to live in New Orleans," he explains. "You don't love New Orleans until you've hated it."
Almost as soon as Sublette and his wife move in, a hurricane threatens to strike and an attempt to evacuate the city fails. He warns a friend, "They're all in denial."
He moves into the gritty Irish Channel neighborhood, in a home that was the site of a notorious murder, and he endures a long, "murdery" year, as they say in the violent city. Sublette considers buying a gun for the first time in his life.
All the while, he is researching the collision of African, European and Native American cultures that laid the foundation for New Orleans' rich musical tapestry.
Born in Lubbock, Texas, Sublette lived until aged 9 in the old city of Natchitoches in northern Louisiana, and recounts how white and black people were segregated in the first section of "The Year Before the Flood." The rest of the book is the story of how he comes to feel strangely at home in the doomed city of New Orleans.
"The real value of the book is its chronicling the passage of time in the last year the city was whole," says Sublette. "As the year passes, you're always going to a festival or a saint's day or an anniversary. There's a very pronounced rhythm, and you can't just parachute in."
Sublette peels back the layers of history beneath festivals like Mardis Gras and the forms of music that keep the city hopping: from the hot jazz of Louis Armstrong and the silky R&B of the Neville Brothers and the bouncing hip hop of Master P's No Limit Records.
Sublette explains that in New Orleans the nature of time is circular, not linear, in what he calls the northernmost city in the Americas' "Saints and Festivals belt."
For Sublette, the city's great historical divide is along Canal Street, where the downtown Catholic Creole culture clashed with the uptown Protestant, English-speaking territory.
"It was the valve between two vast musical hemispheres, one Afro-American and one Afro-Latin, one Protestant with the banjo and fiddle, the other Catholic, emphasizing drumming," one with the American swing rhythm, the other with the Latin clave beat, Sublette said.
For Sublette, the memoir is the culmination of a long musical journey.
His training as a classical guitarist didn't stop him from penning "Cowboys are Secretly, Frequently Fond of Each Other," eventually recorded by Willie Nelson.
After fusing Latin and honky-tonk music with his album "Cowboy Rumba" in 1999 and co-producing the public radio program "Afropop Worldwide," Sublette transformed himself into an author and historian who, he says, uses "music as a way of reading history and vice versa."
His first book, "Cuba and Its Music: From the First Drums to the Mambo," got rave reviews, as did "The World That Made New Orleans."
At a launch party for "The Year Before The Flood," Sublette learned he had made a fan out of Fats Domino, who sent along an autographed photo that read, "Keep writing."
The new book's title, of course, wasn't what Sublette had in mind when he returned to Louisiana.
He initially envisioned the book ending with him heading back to New York City early after a drunken tourist breaks into his home during the city's famous Jazzfest.
But Katrina struck just after he left town. The story all came together, even if it meant Sublette had to start writing the memoir all over again.
While New Orleans' music suffered a near-death experience, and fewer African-Americans have come back than whites, Sublette returned five months after Katrina to see the city's culture reborn.
He compares New Orleans' music scene now to that of New York during the bleak 1970s and Havana in the early 1990s after the collapse of Cuba's backer, the Soviet Union.
He writes, "It was as if the music of New Orleans could literally be the spirit that survived the body."