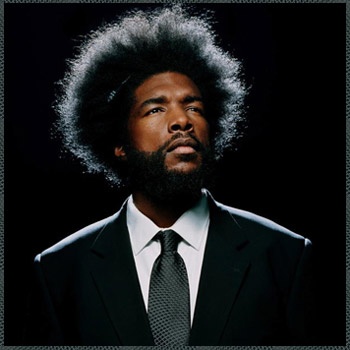 NEW YORK (AP) -- During January's Grammy telecast, hip-hop drummer Questlove tweeted that "watching twitter tweets are better than watching the actual event."
As someone who has won a Grammy with the Roots, attended the ceremony and performed on the show, he should know. And, of course, Questlove, left, who is an avid tweeter, was doing both: simultaneously watching the show and reading real-time commentary from friends and other connections.
During a big televised event such as the Grammys, it is almost impossible to be on Twitter or Facebook and not be aware that the event is happening. At the water cooler that is social networks, big shows like the Grammys and Oscars can dominate the conversation and galvanize an audience.
The Grammys drew 26 million viewers on CBS, up from 19 million in 2009. Not long after, the Golden Globes' ratings went up 14 percent on NBC. The Super Bowl followed as the most-watched U.S. TV event of all time, drawing 106 million people to CBS. The Olympics on NBC have triumphed in the ratings consistently; the opening ceremony for February's Winter Olympics in British Columbia drew 32.6 million viewers.
On March 7, the Oscars on ABC followed suit with an estimated 41.3 million viewers, up 5 million from the 2009 Academy Awards telecast, according to the Nielsen Co. ratings organization.
After years of dwindling ratings and increasingly fractured audiences, big event pop culture has made a comeback. Although particular reasons account for each of these successes, one unifying theory is that social media networks are magnifying the audiences.
Some of the same forces that have divided viewers into niche groups may be uniting people, too.
``It's clear to me that the live experience now includes this sort of interaction,'' said Josh Bernoff, Forrester Research analyst and co-author of ``Groundswell: Winning in a World Transformed by Social Technologies.''
``It's definitely the case that whatever they're doing, they think about connecting around (these events),'' he said. ``The one thing that everybody knows they're doing at the same time is watching the Olympics. The same thing applies to the Super Bowl or the Academy Awards -- these are the sort of big tent pole event programs.''
Nielsen Co. has noticed the growing correlation. It found that 13 percent of those watching the Olympics opening ceremony in Vancouver also were online. Of those multitaskers, the most popular destination was Facebook.
Proving that social network usage is driving TV ratings is nevertheless somewhat elusive. The ratings successes of this year have been credited to everything from snow keeping people inside to the hugely popular contenders at the Grammys (Beyonce, Taylor Swift) and the Globes (``Avatar'').
In recent years, social networking moved into real time and spread to mobile devices, facilitating conversation and immediate interactivity. The network tendrils have grown stronger.
In 2007, Facebook had 12 million active users worldwide; it now has 400 million. In 2007, there were 5,000 tweets a day, according to Twitter; now, it's nearly 50 million a day.
``After several decades of struggling with audience fragmentation, Twitter presents an opportunity to recapture the power of the communal media event,'' Chloe Sladden, director of media partnerships for Twitter, said in an e-mail. ``Its ability to flock attention is recapturing and reminding us of the age-old enjoyment of shared, real-time media experiences.''
Media companies often set up official tweeters and create Facebook pages for big events to foster the dialogue. NBC, for example, created an Olympics ``tweet tracker'' to help viewers find the trends on Olympic-related twittering.
The Oscars, which last year drew more than 36 million viewers, also have revealed a number of online components, a strategy that the academy's director of marketing, Janet Weiss, describes as ``experimental but careful.''
This year, the film academy streamed the Oscar nominations live through Facebook, redesigned Oscar.com and launched an iPhone application.
Those measures still are relatively cautious in terms of fully embracing social media. There was no official tweeter during the ceremony, but Oscar.com aggregated tweets from several in attendance and behind the scenes.
``We'll continue to experiment and see what works and what's comfortable for us and our brand,'' Weiss said.