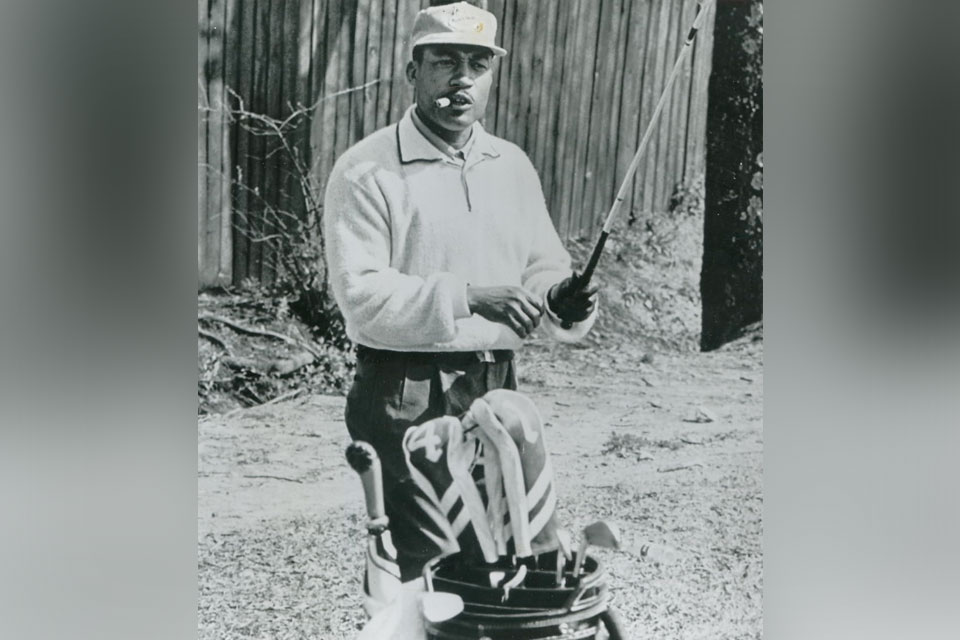 Sitting inside an office at PGA TOUR headquarters in Ponte Verde, Florida, and preparing to remember what would have been his father’s 100th birthday on June 2, Sifford recounted how much his dad loved golf.

He also remembered his father’s challenges trying to break into the sport during segregation and the Jim Crow era.

“In pursuing the game he loved so much, he endured enormous challenges as an African American golfer,” Sifford Jr. recalled.

Born in Charlotte, North Carolina, in 1922, Dr. Sifford, the first Black golfer on the PGA TOUR, began caddying at a nearby country club to earn money.

“Back then, in the 1920s and 1930s, there were very few places where young kids could go to make some money,” Sifford Jr. related.

“He caddied until he was 17, but by the time he was 13, he was considered the top caddie at the course, and many good players asked for him.”

According to Sifford Jr., a byproduct of his father’s outstanding ability to caddie earned him more money than other kids.

“He developed a love for the game. He learned by watching, ”Sifford Jr. remarked.

Because African Americans weren’t allowed to play at country clubs, Sifford Jr. said his father would sneak in a few holes when he wasn’t caddying.

“He said he had a short backswing because he had to play in a hurry and get as many holes in as possible,” Sifford remarked.

“He had one nine-to-five job his whole life, when he worked at Nabisco in Philadelphia when he was 17. He worked there for three years but decided that he wanted to be outside playing golf, and he was determined to succeed.”

All will participate in the top four HBCU Division 1 program, the top HBCU Division II program, and the host school Johnson C. Smith University of Charlotte.

The six schools will send their top four players, broken into two separate teams of 12, with the college teammates staying together in pods.

The Golfstat ranking will determine the programs at the end of this 2022 season.

Sifford Jr. declared that all tributes and events would have meant a lot to his father.

“What he had to go through early in his career, being rejected for certain tournaments, and being treated unfairly because of the color of his skin and now to be recognized from coast-to-coast, by white people, Black people, Asians, and everyone else would make him feel like the job he did turned out positive,” Sifford Jr. asserted.

One year after Jackie Robinson, my father told Jackie that he would do the same in golf,” Sifford Jr. noted.

“Before he went on tour, he talked to Jackie, who asked him was he a quitter and if he was, he shouldn’t worry about trying to go on tour because they’re going to make you wish you weren’t out there,” Sifford Jr. continued.

“It would be harder for him because he’d be out there by himself. Jackie had a team and an owner who supported him. My father would be out there alone.

“But my father had stubbornness, grit, and he was determined that he was going to play golf and nothing or no one was going to stop him.”

He played with an all-Black group led by boxing champion Joe Louis.

However, when the group reached the first hole, they found excrement there, attempting to discourage them from playing.

Sifford Jr. learned about some of his father’s struggles by reading Dr. Sifford’s book, “Just Let Me Play: The Story of Charlie Sifford, the First Black PGA Golfer.”

“Some things surprised me in the book. He didn’t bring a lot of [the incidents] home,” Sifford Jr. recalled.

“I asked him about it when the book came out, and he said all of that really happened. In North Carolina, the first time he went back to the south to play, he stayed with friends that lived close to the golf course because no hotel would let him stay.“

The first day, he was leading the tournament, and then he received a call at his friend’s house, and someone made death threats. So they told him if he showed up, something would happen.

“Being stubborn, he said,

Although he didn’t fare well on the second day, Dr. Sifford finished in the top five and earned a berth into the next tournament.

“It showed me that he had a determination,” Sifford Jr. said. “People threatened his life, but it showed the kind of person he was. He helped me to understand many things, including not judging a person by their origins but how they treat you and if they respect your wishes and treat you fairly.”

In addition to breaking golf’s color line, Dr. Sifford won six Negro National Open titles, earned honors as one of the top 100 people in the First Century of Golf, and earned more than $1.2 million on the PGA TOUR and the Senior Tour.

In 2004, Dr. Sifford became the first Black golfer inducted into the World Golf Hall of Fame. In 2006, the University of St. Andrews awarded Dr. Sifford an honorary degree, and in 2014, President Barack Obama bestowed the Presidential Medal of Freedom on Dr. Sifford.

“It was really exciting because my dad never thought he’d see a Black President, and frankly, I never thought I’d see one,” Sifford Jr. said.

“It was ironic, the first Black PGA member and the first Black President. The two hit it off. President Obama and Vice President Biden were golfers, and during the ceremony, Obama asked my father for golf tips. My father told Biden that he could probably help him but turned to Obama and said, ‘I don’t know what I can do for you because you hit from the wrong side.’”

“It was a fun-filled time,” Sifford Jr. stated.