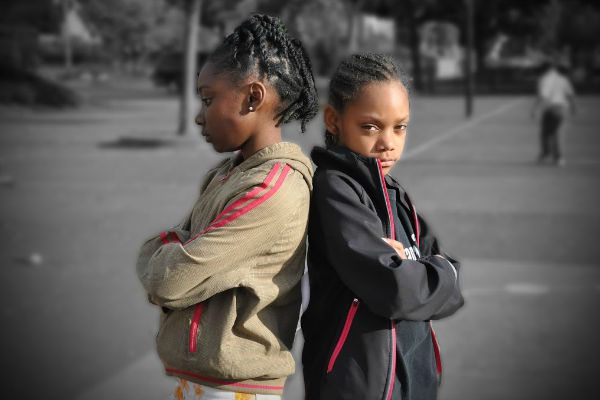 Zara Smith stands alone in her classroom. She gets good grades and is pleasant to her teachers, who all believe she will achieve great things in her life.

She is also lonely, bullied and harassed for her success. She is the subject of relentless teasing, being labeled an “Oreo” -- too Black on the outside, too White on the inside.

Only 10 years old, she wonders aloud to the empty room.

“Acting White? What does that even mean? My mom says we have to work five times as hard to get one step forward,” she asks.

Zara’s story is one of many told in Between the Lines, a play from Maverick Main Stage Productions. The dramatic company hosted encore performances of the drama at the Alberta Abbey on July 24 and 25.

Nearly all of the performances in Between the Lines are from youth between the ages of six to 14.

Jennie Brown, the director and founder of Maverick, told The Skanner News every play Maverik produces is an original work inspired by the cast.

Between the Lines grew out of cast conversations about race. In rehearsal exercises leading up to the writing of the play, Brown kept hearing her young actors tell each other things like, “You’re acting White,” or, “You’re acting ghetto.”

“We kind of explored that together. ‘What does that mean? What does race mean to you guys?’ We really had some very in-depth conversations around that, and it just seemed like a perfect time to make it something for public to come take part of,” Brown said. “It’s an issue that is very real, particularly in this area.”

The play tells stories of racial tension and gentrification through the eyes of elementary school kids, their teachers and parents. At the center of plot is Zara’s teasing by another girl, A.J. Both girls compete with each other through singing and dancing performances and an upcoming talent show, which only heightens the tension between them.

The Skanner News spoke with some of the young cast members about their experiences co-creating and acting in the play. Sinai Jones, who plays Zara Smith, said the play makes people think about racial tension beyond Black versus white.

“I think that our community feels like racial tension is always about it being Black and White, when that is not necessarily the case. But people get bullied and judged because of their circumstances, their stereotypes, what they have and what they don't have,” she said.

“Black people can be smart, too, and get good grades and so can White people. Any race can do good and be successful,” Davis said.

Many of Maverick’s young actors met Brown when she brought theatre arts classes to local public schools. When budget cuts dropped the theatre program, Brown would move on to another school, often bringing performers with her during after-school workshops.

Eventually, she started Maverick independently so that any student could access the program, regardless of school attendance.

Between the Lines closed with the school talent show. Milo arranged a show-stopping medley of Jackson 5 songs and Zara and A.J. mended fences through compassion, understanding and duet.

Tanisha Jones, mother of Sinai and her younger sister (and fellow cast member) Nia, said she was proud to see youth show off their talents and represent their communities.

“I'm proud to see the cast of youth from our community who really reflect what our community looks like and the fact that this play was based off of … their experiences,” Jones said. “I was eager for them to get the message out and be able to deliver that to the community.”

For more information about Maverick Main Stage Productions, visit their website at www.maverickdrama.com.