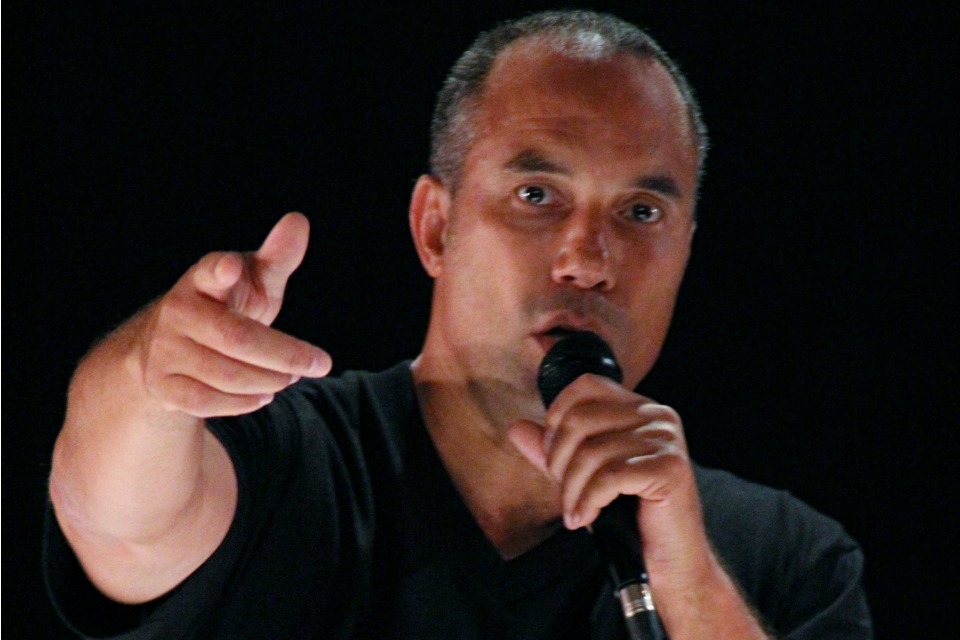 Artists Repertory Theatre will present “Rodney King,” written and performed by actor and performance artist Roger Guenveur Smith, April 21-23 at Alder Stage, 1516 SW Alder. This production will be the final stage performances of Smith’s piece, which has been touring since 2012, and the last before Netflix releases the Spike Lee-directed film “Rodney King” April 28.

Artists Rep’s production is presented on the eve of the 25-year anniversary of the Rodney King trial verdict of 1992, which acquitted the four police officers who brutally beat King in 1991 and sparked the L.A. riots. Post-show discussions will follow every performance.

“Rodney King” tells the story of a flawed, good-hearted everyman, described once as “the first reality TV star,” from his harsh entry into the national spotlight to a lonely death at the bottom of his swimming pool. Smith asks us once again, “Can we all get along?”

“Rodney King is one of the most powerful performances I've ever witnessed,” Jerry Tischleder, Frontier Series curator, said in a press statement released by Artists Repertory Theater. “We are deeply honored and incredibly lucky to host Roger’s monumental work at such a crucial time, one that coincides with the 25-year anniversary of the L.A. riots, the launch of the film version directed by Spike Lee, and most importantly, at a time when police accountability, racial tensions and our cycle of violence demand community action in Portland and across the country.”

With the help of an Oregon Community Foundation grant, Artists Rep will offer a free student matinee and facilitate a student workshop led by Smith. The student workshop with the renowned performance artist, actor and educator will be held at 4 p.m. Thursday at Roosevelt High School. The workshop is coordinated by S. Renee Mitchell, a teacher at Roosevelt High School, artist, journalist and mentor of Portland youth. The workshop will bring together students from throughout the Portland Public Schools to work with Smith on the intersections of history, journalism and performance. These students, along with classes from high schools throughout Portland, will be the first Portland audience for “Rodney King” for an April 21 matinee performance.

Programming for this production also includes a workshop and free student matinee for area youth, a Roosevelt High School student lobby exhibit and performances from the youth of Spit/WRITE, as well as post-show discussions after every performance (moderated by The Color of NOW). Saturday night’s post show discussion will include a panel of Portland history and race relations experts. Following the Sunday matinee Chisao Hata will conduct a “Move Back,” a movement-based post show exercise.

“Rodney King” was developed at the Bootleg Theater, Los Angeles, in August 2012 and subsequently presented in that city at the Kirk Douglas Theatre, Grand Performances, University of Southern California, KAOS Gallery and the Manifest Justice Festival. Among the many international venues which have presented the work are the Tate Modern Museum, London and the Right About Now Festival, Amsterdam, as well as Woolly Mammoth, Penumbra Theatre, Seattle Theatre Group, The Public Theater and Long Wharf Theatre.

Smith’s historically-driven work for the international stage also includes “A Huey P. Newton Story,” “Christopher Columbus 1992,” “Who Killed Bob Marley?,” “Juan and John,” “In Honor of Jean Michel Basquiat,” “The Watts Towers Project,” “Iceland,” “Two Fires,” “Patriot Act,” “The End of Black History Month” and, with Mark Broyard, the “not-too-dark-comedy” “Inside the Creole Mafia.” For the Frederick Douglass Bicentennial of 2018, Mr.Smith will present his signature “Fredrick Douglass Now,” which he initially devised as an undergraduate and has since played at the Kennedy Center, The Public Theater and the Institute of Contemporary Art, London.

Smith has also directed Katori Hall’s “The Mountaintop,” Steven Berkoff’s “Agamemnon” and “The Hendrix Project” at CalArts, where he conducts his Performing History Workshop. Among Roger’s many screen credits are the recently acclaimed “Birth of a Nation,” “Chi-Raq” and “Dope.”