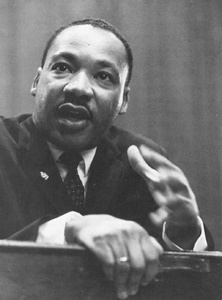 For tickets e-mail mlkbreakfast@theskanner.com or come to The Skanner office, located at 415 N. Killingsworth, between 8:30am and 4:30pm, Monday-Friday.

Tickets are $75
(There is a limited number of non-profit tickets available.)
Tables are $750

• Please Bring 2 Cans of Food Per Person to Feed the Hungry.

• Small Business opportunities update by The Oregon Department of Transportation

The theme for 2006 was "Lessons from Katrina for King's Beloved Community".

The Annual Skanner Foundation Martin Luther King Jr. Breakfast celebrated its 20th year in 2006. More than 1,000 people attended the breakfast, making it the largest event in the Pacific Northwest to honor Dr. King.

Governor Ted Kulongoski of Oregon attended and presented a proclamation.


Every year, we award several thousand dollars in scholarships to worthy students who have demonstrated their desire for self-improvement through education. We also present two awards (The Drum Major Award and The John Jackson award) to individuals, community organizations, or businesses that continue Dr. King's work for civil rights in their community. During the past 20 years, over $220,000 has been contributed to the community for educational growth.

Our breakfast offers the opportunity for major corporate sponsors to increase their visibility in our community and beyond. Attendees include representatives from the state of Oregon; the Oregon Lottery; Oregon Economic and Community Development Department; local, regional and state elected officials; and representatives from national corporations such as State Farm, American Family Insurance, Brown & Williamson, Kaiser Permanente, McDonald's Corporation, U.S. West and Safeco. In addition, leaders in law enforcement, education, and the religious sector attend, and people in the community from all walks of life.
Related Links
http://www.thekingcenter.org/

Nominate an individual or organization
In preparation for its 21st annual Martin Luther King Jr. breakfast, The Skanner is requesting nominations for awards. The Drum Major for Justice award and the John Jackson award will be given to individuals or organizations. The Skanner is looking for nominations for people who have worked throughout the year to fulfill the ideals the Rev. King stood for: equality, justice, racial harmony, civil rights and peace.

E-mail your name, phone number and the name and phone number of the nominee, along with a short (50 words or less) description of why your nominee should receive the award to mlkbreakfast@theskanner.com. Or mail to: