Homeowner Associations, Part 3: Where Does the Money Go? 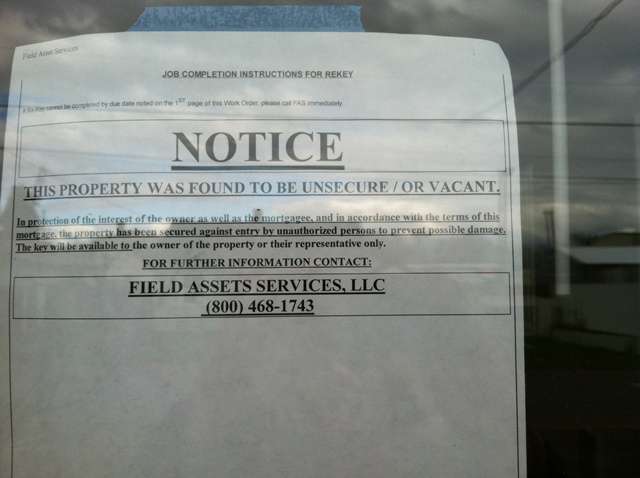 A legal notice taped to a window on a cottage at Snoozy's Hollow in Northeast Portland. In our two-year look into homeowner associations and their affiliated businesses, The Skanner News heard many stories about simple disputes that led to eye-popping legal costs; some residents have even lost their homes. Because the industry is “self-regulating,” many of these homeowners have nowhere to turn for consumer protection.

Because of the homeowner contracts that rule their operations, the nonprofit HOA boards as well as the commercial management companies that run them, are not considered subject to FOIA or other disclosure rules.

Some of the most bitter disputes involving HOAs swirl around homeowners’ access to the financial records kept by the volunteer boards and management companies.

Critics say the lack of transparency in the HOA sphere is contributing to a rising tide of embezzlement nationwide.

In the Northwest, the biggest known embezzlement case is that of Empire Community Management in 2012, where the chief financial officer allegedly drained an estimated $1.5-2 million from the accounts of 31 HOAs stretching halfway across the state.

“The alleged embezzlement comes as a one-two punch for Cedar Lake residents,” wrote Mara Stine of the Gresham Outlook newspaper about one HOA impacted by the theft. The small East County community had earlier voted to increase their assessments by one quarter to pay for an environmental restoration project transforming their local lake back to a wildlife habitat, only to find all the money gone.

There may be more such cases. But we wouldn’t know. The law does not require management companies to reveal complete financial data – or even submit to regular audits -- unless the HOA’s contract has that specifically written in.

At Deltawood, critical homeowners say the management company refuses to give detailed financial reports that would show exactly how their monthly assessments  are spent. Instead, the company hands out a worksheet with assets, plus liabilities and equity, along with a rudimentary spreadsheet with budgeted money figures but no line-item specifics.

A copy of the Deltawood balance sheet for the calendar year 2013 is a major bone of contention. Year-to-date expenses include $474 for website management — but the Deltawood website hasn’t been updated since 2012.

But the grass in the common area spent much of 2013 overgrown, with a gigantic padlocked fence around it; currently one abandoned cottage has a large pile of trash in the backyard.

Situated directly on the other side of the levee that destroyed VanportCity, the Deltawood HOA is itself the drain for part of Northeast Martin Luther King Jr Boulevard. The Deltawood association board president recently reported that she’s in meetings with the Oregon Department of Transportation on how they can find a solution to the flooding problem for some of the western-most houses in the complex.

Normally the point of an HOA is that residents pool their money to repair and maintain their neighborhood, chipping in a monthly assessment that goes into one pot for that purpose – the local municipality is off the hook for garbage, sewer, water services and road maintenance, among other things.

The language of these privatized systems is enshrined in state law – but, confusingly, HOAs can only be created with a sign-off by local municipalities, most often city governments. Critics say that for homeowners, it’s the worst of both worlds: Their services depend on the support of all the residents, but if something goes wrong, the local government that won’t help consumers navigate conflicts ends up bailing everybody out, sometimes to the tune of millions of dollars.

That’s why the City of Portland’s 2010 bail-out of Snoozy’s Hollow’s broken water system — the root cause of Kraft’s plumbing crisis in the first place — is an important development for taxpayers. Because the HOA was too broke to fix its own aging infrastructure, as much as $1 million worth of plumbing, sewer and road improvements have been installed for these 42 World War II-era cottages.

For its repairs, the City of Portland put $10,000-15,000 liens on every house in Snoozy’s Hollow, and required the HOA to pay back $60,000 from past-due unpaid water bills, generously scaled back from the $100,000 original tab. City officials confirm that bill is being handled by a collection agency, and few at City Hall expect it will ever be repaid.

Weeks ago, voices were raised at Snoozy’s April HOA board meeting on report of the ODOT involvement in neighborhood drainage. One homeowner demanded, “Are they going to put another lien on our houses?”

Failing HOAs that require municipal bailouts are the newest trend in the industry, McKenzie says. And that should come as no surprise.

“I think homeowner associations place too much reliance on the resources of the owners. Basically they were set up by local governments and real estate developers because they suit THEIR interests. They allow developers to make a huge amount of money and they allow local governments to get a tax windfall to get full property tax payments from people who are not getting full public services and who have to pay a second time to their homeowner associations to get the same services as everybody else. I mean that’s an increasing trend.”

Kraft is scheduled to speak at the Portland City Council meeting, Wednesday, May 23, at 9:30 a.m. on the City’s power to dissolve homeowner associations — and why officials might  consider using it before they end up bailing out other failing HOAs.

Meanwhile, trash is piling up behind the fences of empty cottages. On rainy days, big drainage pipes collect runoff from King Boulevard, dumping it out in the eastern-most yards, and some homeowners can’t walk from their door to the street without makeshift plywood bridges across the flooded gutters.

“These people have stolen my forever home,” Kraft says, “and nobody cares.”

Read Part 2 of this series here.