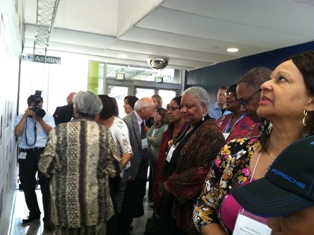 In 1957, Oregon Dental School graduate Clarence Pruitt was refused space in Portland's Medical Arts Building simply because he was Black. Around the same time, civil engineer Jean Richardson, had to work for free, until she convinced her employer that a woman could do the job. Neither one was deterred by the barriers they faced; in fact they tore those barriers down, opening doors for generations to come. 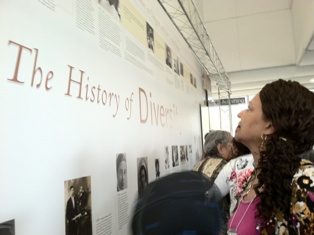 Now their legacy is on display at Oregon Health and Science University's Kohler Pavilion, two of many pioneers honored in the hospital's new Diversity Wall. The 25-foot-long commemorative wall is located close to the top of the aerial tram, where hundreds of visitors each week will view it. The diversity Wall chronicles significant events in OHSU's history that recognize diversity within the university's workforce. The wall also highlights major diversity milestones in the United States. 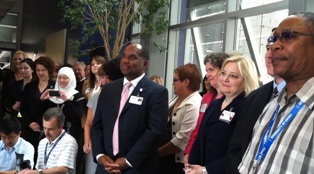 "This week we will observe OHSU's past milestones in becoming an organization that values diversity on several levels. These milestones include the many firsts that helped transform the makeup of OHSU's workforce. In addition, because we are an academic institution, we also celebrate the diversity of ideas that are generated by an organization that seeks to be inclusive." 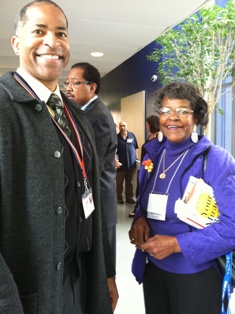 About 100 people, including Pruitt's widow Joy and his son Andre attended the unveling ceremony Wednesday June 29. Joy Pruitt, who taught in Portland Public Schools for many years and was a principal at three, said her husband would have loved knowing he was part of this tribute to Portland's diverse medical professionals.

"Diversity is something he believed in strongly, " she said. "He was responsible for eight Black students going to the Dental School, when he was an instructor. There have been none since. So it really makes a difference having a Black instructor."

The couple's three children all chose medical professions. Andre Pruitt is a clinical social worker at the Avel Gordly clinic, which works with Oregon's diverse communities, particularly African Americans. Another son followed in his father's footsteps as a dentist. And their daughter is a doctor.

Students at the School of Dentistry help staff the Russell Street Clinic, providing free and low-cost treatment to the elderly, homeless, low-income families and migrant workers. It has since become a national model for how to treat low-income, homeless and HIV-positive patients.

Former The Skanner News editor, Mike Axley, now a doctor, came up with the idea for a diversity wall. OHSU's diversity advisory council made it happen, waiting almost a year for permission to use the wall.

Three of the Pioneers Profiled On the Wall

Clarence Pruitt, D.M.D., was the first African-American to graduate from the University of Oregon Dental School in 1949. Despite being refused an office in the Medical Arts Building, he went on to become the first African-American to establish a successful dental practice in the Selling Building. Responding to the discrimination he faced, the Portland District Dental Society adopted a resolution condemning any building owners who would refuse to rent office space based on an applicant's race, religion or national origin. Pruitt became the first African-American part-time faculty member in the School of Dentistry, working closely with Dean Louis Terkla and Keith Claycomb in the recruitment of minority students to the School of Dentistry.

Jean Richardson, B.S.C.E. - Jean Richardson graduated from Oregon State University in 1949 with a degree in civil engineering. She persevered through discrimination at school and at work and paved the way for women in a field largely dominated by men. She began working pro bono for an Alabama engineering company until her employer deemed her work competent. Jean went on to own her own company and became the first woman to head maintenance engineering for the City of Portland. She helped to found the Alabama chapter of the Society of Women Engineers and served on its Board of Directors. She also served as coordinator for Mathcounts in Oregon and Alabama - a national program targeted at 7th-and 8th-graders interested in math. Richardson ended her long career in civil engineering working on Portland's Columbia River sewage treatment plant. As a pioneering Oregonian, Richardson was honored by OHSU in 2007 as a namesake for Portland's new aerial tram

Frances Storrs, M.D. - Storrs was the first woman resident accepted at the medical school and the first female resident to complete all of her training in the school. Storrs joined the faculty in 1968, the only female member for 21 years in the Department of Dermatology. In 1971 Storrs, while attending an event honoring a visiting dermatologist, was asked to leave Portland's Arlington Club on the basis of her gender. This was a profound moment for Storrs, as she experienced discrimination first hand. This event influenced Storrs' life and career, as she later fought for equal pay for women in the medical school. When OHSU started an Affirmative Action committee in 1983, Storrs served as the first chair.