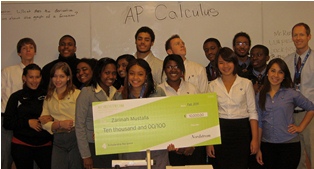 The financial burden of heading to college just got a little easier for Portland high school senior Zarinah Mustafa.

In 2011, Nordstrom awarded 80 such financial prizes to students in 28 states as part of the Nordstrom Scholarship Program. The scholarship effort has been part of the company's philanthropic side since 1994.

Mustafa, accompanied by members of her AP calculus class in the photo above, hopes to attend Spelman College in Atlanta, Tuskegee University in Alabama or Connecticut's University of New Haven.