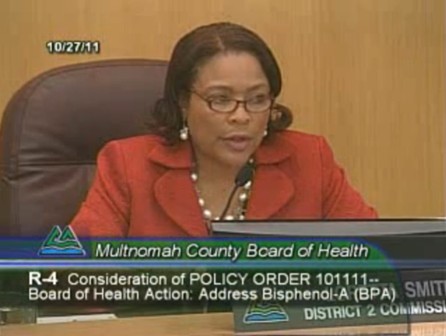 Multnomah County Board of Supervisors Thursday, convening as the County Board of Health, voted to ban reusable drinks containers made with the toxic chemical Bisphenol-A (BPA) – often found in baby bottles, sippy cups, and reusable water bottles, as well as most canned food liners.

"African American mothers are breastfeeding at lower rates and are more likely to use formula," said Sonia Manhas, manager of the county's Office of Public Health and Advocacy, at yesterday's meeting. "The most important pathway for infants to be exposed to BPA is through plastic baby bottles."

The vote makes Multnomah County the first jurisdiction in the state to take the controversial move, which officials say is largely because of the racial and economic equity issue involved: Many of the households impacted by the BPA-contamination are the least likely to be aware of it.

"I want to reiterate the equity issue here – low income communities and communities of color are impacted the most," said Dr. Gary Oxman, public health officer for Clackamas, Multnomah and Washington Counties.

"These concerns, when taken together, make it reasonable for the County Board of Health to take immediate action.

"When you wait for absolute scientific proof, a lot of lives are ruined in the meantime," he said.

A similar ban proposed in the Oregon legislature was torpedoed in the Senate last year, when lobbyists for Associated Oregon Industries fought back a simple ban only covering infant bottles and sippy cups.

After a long fight, a compromise measure that many expected to pass was voted down by all Republican senators plus three Democrats: Sens. Betsy Johnson of Scappoose, Martha Schrader of Canby and Joanne Verger of Coos Bay.

As members of the County Commission heard testimony on the BPA ban, Commissioner Loretta Smith asked Health Department staff how moms can avoid using contaminated bottles and cups in the meantime.

Lila Wickham, director of environmental health, suggests looking for baby items clearly labeled "BPA-Free." In 2008, many major retailers, including Wal-Mart, announced they would pull contaminated items off their shelves, making it easier to find safer products.

Wickham also suggested turning your baby products over and checking for a recycling symbol at the bottom; any marked with the number 7 may contain toxics used to harden the plastic.

The Environmental Working Group goes farther, addressing the still-unregulated issue of BPA in plastic linings of canned food, which researchers say may be triggering a host of health problems such as heart disease and diabetes.

"Almost all canned foods sold in the United States have a BPA-based epoxy liner that leaches BPA into the food," the group said in a 2008 report. "EWG tested 97 canned foods and found detectable levels of BPA in more than half of the foods."

They found the highest concentrations in canned meats, pasta and soups.

"Pregnant women and children should limit their consumption of canned foods to avoid BPA," the group says. "Rinsing canned fruit or vegetables may reduce the amount of BPA you ingest." 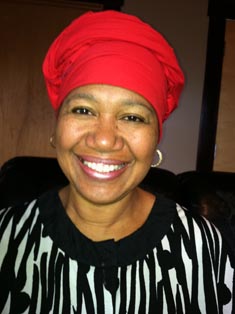 Shafia Monroe, of the International Center for Traditional Childbearing, works to educate the local community about the benefits of avoiding baby formula – and bottles – wherever possible.

"We are concerned about the statistics on overall health of the African American community in Oregon, our work is absolutely culturally specific to bring information to Black communities around the benefits of breastfeeding," she says.

"At ICTC we look at the evidence-based information that tells us that breast milk is the ideal food, we look at information from the American College of Pediatrics and many other organizations that have done a lot of research on the benefits of breastfeeding."

Monroe says breastfeeding is not only the best choice for moms nutritionally, and economically – it's free, after all -- but it's also the best way to build emotionally strong children.

"We want the families to realize that whether it's a baby bottle or a pacifier or a sippy cup, we would hope that they would use – to be honest – a human breast as a way to not only give their baby the best nutrition, but also to give them overall emotional contentment," she says.

Monroe says the real test of how well the county's new BPA ban works will be in how it's enforced and who is educated about it.

"I think all chemicals are dangerous for people, in particular babies who are still developing," she said.

"I will speak to the fact that when it comes to toxic environmental disproportion, historically, nationwide, we know we have brownfields around the country, whether it was lead poisoning or the recent chemicals – just looking at where people have to shop and where they have to live and the options for food and care translates into something becoming more of a hardship for this group of people."

"ONA works with the most vulnerable populations -- women, infants, children – and frequently the people we care for have nowhere else to turn," she said.

"It ensures parents have one less thing to worry about."

Before the vote Thursday, Commissioner Smith called out the state lawmakers who failed to support the Oregon ban.

"While it is encouraging to hear that the market is moving in the right direction, not everyone is there yet.

"I am convinced we're being proactive in taking care of some of the most vulnerable members of our community – which is our children," she said.

"I'd like to thank Chair Cogen for his leadership on this issue and I hope that the state will follow suit in the near future."

Find out more about the International Center for Traditional Midwifery here.