Mayor Sam Adams: Occupy Portland Must Leave Camps by Saturday Or Be Evicted

By Helen Silvis of The Skanner News
Published: 10 November 2011 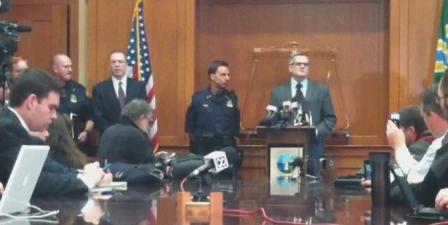 The Occupy Portland protest must pack up its downtown camp by Saturday at midnight or be evicted. Mayor Sam Adams announced the decision Thursday morning along with Portland police chief Mike Reese and Commissioner Nick Fish.
"I can't wait for someone to die in the camp," Adams said. "Events have conspired now to the point we have to act.
"In the past few days the balance has tipped. 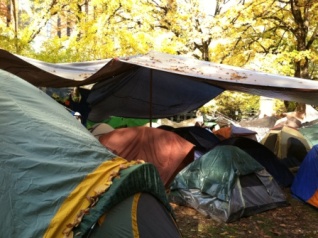 We have experienced two very serious drug overdoses where individuals required immediate resuscitation in the camp, and has been widely reported police have arrested a suspect in Tuesday night's disturbing Molotov cocktail incident. Crime, especially reported assaults, has increased in the area and around the camps. This is in addition to the health and sanitation issues. Occupy has had considerable time to share its messages, but it has lost control of the camps it created. "

Victoria Taft, the KPAM shock jock asked the mayor if he would issue an apology to "law abiding" Portlanders who have faced disruptions from the protest. Adams refused, saying the city must balance the right to free speech with the right to keep the city safe.
Representatives from the Occupy movement said they already were planning to move indoors. They asked the mayor not to impose a fixed deadline, but Adams said he intends to stick with the deadline.
Several arrests have been made in and around the camp. David Joseph Hodson, 29 was arrested Nov. 9 and faces charges related to starting fires near the camps, and throwing a Molotov cocktail at the World Trade Center. Adams said outreach workers will be at the camps offering resource information to homeless people.
"It is my sincere hope that the movement with its focus on widespread economic inequality will flourish in its next phase, a phase where we can focus all our energies on the economic and social justice and not on portapotties and tents," Adams said.
Commissioner Nick Fish said the city has opened its winter warming centers and will open the emergency centers also, so that those with nowhere to go can get help. 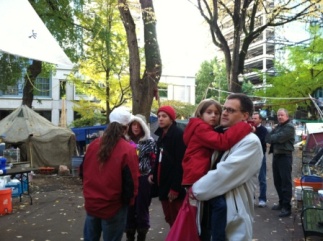 Police will work with the federal government to clear all three camps used by the demonstrators: Lownsdale Square, Chapman Square and Terry Schrunk Plaza.  Chief Reese refused to discuss how the police plan to enforce the decision.

"I'm not going to talk at all about the tactical plan," he said.
Pointing to violence and conflict between Occupy demonstrators and police in Oakland, New York and elsewhere, Reese said Portland police had acted with restraint in a challenging situation.
"Portland has been at the forefront of a peaceful movement," he said. "We have worked with the leaders of the Occupy movement to do something unique, that really reflects the spirit of Portland."
The announcement comes at the start of Portland's  official holiday shopping season.  Yesterday five temporary  'pop-up' stores opened downtown, including  Flurry, which sells fashion by local designers. The Oregonian reported that the pop-up stores made sales of $98,000 over six weeks, last year.  And Portland's Christmas tree has been delivered to Pioneer Square. It will be lit with more than 14,000 lights Nov. 25  at the 27th annual tree lighting ceremony.
At the Occupy camp, the news was met with disappointment and anger. 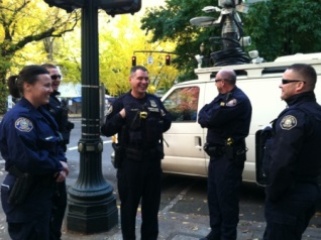 The Portland Police department has released daily updates detailing every drug  problem, disturbance and police intervention in the camp. Some advocates are saying this public relations effort aimed to build support for closing down the camp. Crime happens all over the city, they say, and wherever people are gathered.
"We had a plan to move indoors," said Mike Withey, a camp resident."What they did was they circumvented us. They've upped the ante.  It's ridiculous. We had a plan to get homeless people indoors. It's beyond belief."
Withey and several others at the camp told The Skanner News that the Occupy Portland camp was the beginning of a solution to problems of homelessness and crime, not a cause of it.
An African American man who wanted to be identified only as Joseph, said he planned to remain in the square even if it meant getting arrested.
"I'm going to jail. They are going to book me," he said. "They are going to write a lot of paper. And they're going  to book a lot of people." 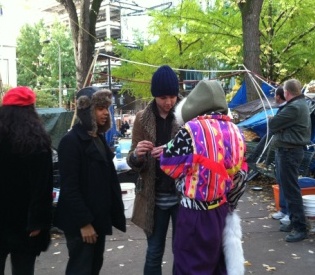 "These are problems society has caused and we are trying to correct it. And we are the evil ones?
"The drug problems didn't start at Occupy; they started on the streets of Portland," he said. "We've got no meth labs here. We're not growing pot here. We don't have coca plants. Clean up the streets. Clean up the trailer parks. They are acting like the problem started here, but it didn't."
Crime is happening all over the city and it's only because a lot of people are gathered downtown that crime there has risen, he said. Disperse the camp and the crime will be dispersed, but it will also remove the opportunities to work with the problems and solve them.
Sarah agreed. 'A lot of people think the ugly things they see here are caused by this place, but really these things are caused by our society," she said.  "It will just move out into people's neighborhoods. Here people have something to believe in. We're feeding people and that's what this movement is; it's about ending greed and it's a worldwide phenomenon, not just here.
"just because you say the war is over, doesn't mean the fighting will stop."
Protesters held an emergency meeting at noon to discuss the news and develop plans.

Tents also are clustered on a lot in Old Town at the "Right 2 Dream Too" camp. Aimed at drawing attention to the increasing numbers of homeless people in the city, the camp is smaller and more contained than the Occupy encampment.
The city has moved to close down both the Occupy Camp and the Right 2 Dream Too camp, through the Bureau of Development Services, which sent out letters Nov. 6 threatening both the city's own parks bureau and the Old Town property owners (Michael and Linda Wright, and Daniel and Donna Cossette) with fines.
The camps are illegal because they lack permits, the letters say, and they are violating city building codes. The letter gave the property owners 30 days to comply.

Mike Dee, a spokesperson for the Right 2 Dream Too camp, said Portlanders should be cautious about how the Mayor and police use their authority in shutting down Occupy Portland.
"I think it is great that the city is going to declare an emergency to provide services to people and to help people out with housing," he said.
"People are going to die because of lack of shelter. If this is what it takes for the mayor to declare an emergency and make sure safe shelter is available for people, then that's unfortunate but it's long overdue."