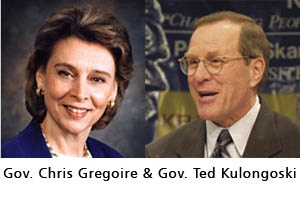 At a recent roundtable discussion on prescription drugs, Gov. Ted Kulongoski announced two major initiatives to reduce the costs of medicine for uninsured Oregonians and state and local governments —"Buying smarter and buying together" is the way the governor described them.
"The rising cost of prescription drugs hurts everybody — families, businesses and Oregon taxpayers," the governor said. "But by buying smarter and buying together, Oregon can save millions of dollars on prescription drugs and provide lifesaving medicines at lower cost to taxpayers."
Citing a report by the Heinz Family Foundation, "The Oregon Blueprint," the governor said the state could save up to $17 million a year by consolidating the purchase of prescription drugs, ensuring more transparency and accountability in prescription-drug purchasing contracts and doing a better job of coordinating drug utilization and using management tools. The Heinz report is the result of an outside review of drug purchases by state agencies that the governor requested two years ago.
In addition, Kulongoski announced that Oregon will join the state of Washington to maximize savings for uninsured people and employers in both states by combining the states' buying power. Creating a Northwest Prescription Drug Consortium, the governor said, will pool the two states' drug-purchasing to negotiate better prices and bolster savings for participants.
"It's clear that we have an opportunity to save money on lifesaving prescription drugs though smart purchasing and pooled resources," the governor said. "This is about accountability — making government accountable to taxpayers, and making the best possible use of tax dollars. It's also about the health of thousands of Oregonians — individuals and employers — who struggle to afford the cost of health care. By creating opportunities for employers to save money on health insurance for their employees, and for uninsured Oregonians to get their prescription medicines at discounted prices, we all benefit from a healthier Oregon."
The governor has directed state Department of Human Services Director Bruce Goldberg to lead an interagency workgroup to develop a coordinated prescription drug purchasing plan for the state. The group will work to achieve the following goals:
• Maximize the state's purchasing power.
• Improve coordination of services.
• Minimize administrative costs.
• Achieve the greatest possible savings.
Kulongoski also pledged that his 2007 legislative agenda would include an effort to reduce prescription drug costs by using an enforceable preferred drug list. By itself, an enforceable preferred drug list for Medicaid could have saved the state more than $15 million since 2002, according to the Heinz report. However, the Legislature blocked Gov. Kulongoski's efforts to implement a Medicaid drug list both in 2003 and 2005.
The new Northwest Prescription Drug Consortium plan will combine the buying power of the two states' purchasing pools to negotiate better prices and generate substantial savings for participants, Kulongoski said.
Washington Gov. Chris Gregoire called the consortium "great news" for the people of both states.
"By pooling our resources, we have provide even greater buying power and can negotiate prices that will potentially save Washingtonians and Oregonians thousands of dollars a year," Gregoire said. "This partnership is a great example of what we can do when we work together on behalf of consumers."