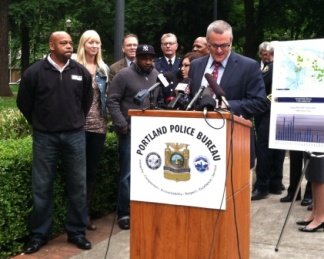 Portland has seen close to 60 gang-related police callouts this year, an increase over previous years. The problem of increasing violence is national, the mayor noted.

"There have been 21 murders in Seattle in the last five months," he said. "Luckily our rate is lower. There have been in the City of Chicago, nine people killed and 44 people injured in gunfire just last week. We don't want it to get that bad."

Portland Police Chief Mike Rees said he will work on the gang enforcement team this summer. Rees said the enforcement team will pull in 14 additional officers from the Drugs and Vice team and three precincts. Rees also is adding four more officers to the Gun Task Force, making a total of eight. School resource officers will back up precinct patrols.

U.S. Attorney Amanda Marshall said the collaborative effort that stresses prevention is key because, "We can't arrest our way out of the problem."

Yet she also issued a warning to anyone with a felony conviction who picks up a gun.

"We're the feds and we're here to help," she said. "We've gone from one prosecutor to four in my office, specifically dedicated to prosecuting gang cases in Oregon."

Those prosecutors will work closely with police she says, and will be on call 24/7.

"If they encounter a gang affiliate, gang associate or gang member who is a felon in possession of a firearm, we will take those cases…And if they call one of our prosecutors on a Thursday night and say 'I've got a felon who is a gang member with a firearm,' then by Friday morning we will have a federal indictment ready to go… when there is a federal remedy for a stiff sentence available over at the Hatfield Courthouse, then we will make sure that sentence is available to any gang member who is a felon, who is caught with a gun in this city."


Adams said Holladay Park was chosen for the announcement because community efforts have turned it into one of the safest places in Portland. Shiloh Hampton, a 14-year-old Madison High School student was shot and killed near the park last year. 'Connected' a group started by longtime gang outreach worker John Canda has brought adults into the park to speak to youth. Connected is affiliated with church-led youth violence prevention group 11:45. Pastor Matt Hennessee urged community members to join its ranks.


Royal Harris who works with gang –affected young adults, said one concern was that gentrification has dispersed gang affected youth across the city, but particularly to East County.  Relationships are what keep young people connected to the community, he said. Adults can help by noticing and caring about what happens to youth.
"One of the things that repeatedly comes out of the mouth of young people is that they seem to be invisible to adults," he said. "One of the imperative things is that we try to create these relationships – not necessarily by trying to be a mentor to every child, but being that adult who is aware of them and empowers them through acknowledging them."
"A lot of the time the behaviors we encounter are cries for help," Harris  said, and quoted youth worker  Sam Thompson, who said, "We don't have a youth problem; we have an adult problem."

The economy is thought to be one of the factors causing the increase in gang violence noted Police Gang Enforcement Team lead  Capt. Ron Alexander.
Portland youth, particularly youth of color are experiencing high unemployment rates, according to Worksystems data, reflecting a lack of job opportunities and high poverty levels.

Commissioner Nick Fish said Portland Parks has many programs on offer to teens this summer. The 2012 Operation Safe Summer guide, available in print form at community centers, lists those programs.

Portland funds 10 gang street outreach workers. The Skanner News asked Mayor Adams, why -- with an estimated 800 gang members in the city, --he had not budgeted for more. Adams pointed to the tight 2012  budget where every bureau has taken big cuts. Other cities have cut outreach workers, he said.
"We worked really hard to better organize the resources we had," he said. "It's why it was important to me that there be no cuts to sworn police officers. It's why we have worked to fortify all the opportunities under Operation Safe Summer for youth to have fun, for parents to have the resources to provide the kind of structure that dowesn't necessarily exist when school is out. It's why we made no cuts to the youth gang outreach workers -- the civilian workers -- even in a tough budget. These are programs I prioritized in my budget...  We need them."