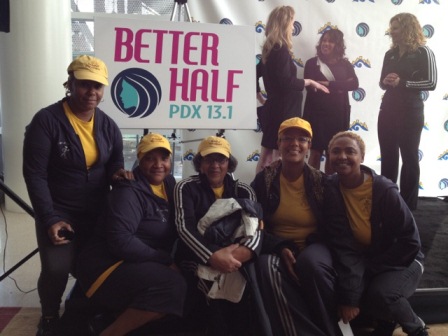 Felicia Hubber's father started the Hood to Coast Relay 32 years ago and she was there for the first race.

"I was three months old on my mom's backpack," she says. "I've been there for about 29 of the last 32 in one regard or another."

Now the Vice President of Hood to Coast/Portland to Coast Relays, Hubber is announcing a new race, the Better Half.

The event, set for June 30, next year, will focus on promoting women's health and will include a half marathon and relay.

Hubber says the inspiration for the new race came from her husband Jude, who calls women "the better half."

"We wanted to do something more for women and that was oriented towards women's wellness and promoting women's health," she says. "It helps in regards to the local community and trying to get people more active and live healthier lifestyles so that they live longer. You tend to notice that people that become more active tend to eat healthier and they feel good."

While women are a large segment of society, Hubber says they sometimes feel overlooked. She hopes the new race will help Hood to Coast reach out to a different segment than they normally do.

"Women's health and wellbeing, and allowing everybody to have a chance to participate in sport at whatever level they are at is really what it's all about, and how we're going to turn things around in this country and this community," says Sarah Mensah, Chief Operating Officer of the Portland Trailblazers.

In addition to promoting women's health, the event will fundraise for the Knight Cancer Institute, OHSU Sports Medicine, the Multiple Sclerosis Center of Oregon and the Police Activities League (PAL).

Hubber says the Better Half will be a great avenue to raise funds for research, specifically around cancer, and patient advocate programs. In terms of PAL, she says it's a great organization that promotes youth awareness and good relationships between the police, kids and sports.

Although the course has yet to be announced, Hubber hints that it will be "extremely scenic".

"It will be on the west side of Portland and covering some of the East side as well," she says. "Absolutely beautiful. A lot of great views of the city, the river, the Portland region and it will really showcase the city in a positive light."

Hood to Coast events have never given out prize money, yet the incentive of bragging rights has made for no shortage of participants. Hubber says they are expecting up to 12,000 participants for the Better Half.

Amber Barrett Webster, executive director of the March Wellness and Fitness Center at OHSU is excited for the opportunity to put fitness in the spotlight.

"We strongly believe exercise is medicine," she says. "We look forward to the inaugural half marathon this summer and are pleased to be partners in an event which promotes health while supporting efforts to assist those that are battling disease and injury."

For more information on the Better Half, go to http://www.portlandbetterhalf.com/.