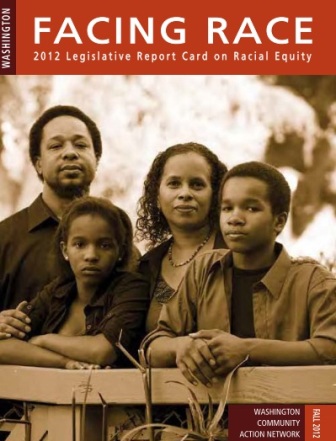 Endorsed by 52 organizations throughout the state, the report assesses the performance of the Washington Legis­lature during the 2011 and 2012 Regular Sessions on issues that impact racial and economic equity. The Legislature overall earned a "D," and community leaders offered specific solutions to help the Legislature do better in the upcoming session.

The events took place on International Human Rights Day and highlighted that although we have come a long way in the fight for civil rights and racial justice, we still have a long way to go. Demographics in Washington are changing: people of color currently represent nearly 30 percent of Washington residents, and that number is expected to grow. Nearly 1 in 5 of Washingtonians are either Latino or Asian and our state is home to over 886,000 immigrants.

Despite these shifting demographics, staggering racial disparities exist across almost all social indicators. These disparities are largely a result of policy decisions that are made every year by the Legislature on issues such as education, housing, taxation, health care, civil rights, and tribal sovereignty.

"Legislators have a choice," said Paola Maranan, the executive director of the Children's Alliance and a speaker at the release in Seattle. "And their votes can either increase access and opportunities, or reinforce barriers that deny some families the opportunities they need to thrive."

Many legislators are not making the grade when it comes to racial equity in Washington. Sixty legislators (40 Representatives and 20 Senators), or 41 percent of the Legislature, received failing grades. Of those failing, nineteen legislators live in a district with over 30 percent constituents of color.

The Legislature can and must do better, and the events were solution-oriented. By focusing on the missed opportunities indicated in the report (bills that would have advanced racial equity in Washington but did not pass the Legislature), each release reinforced the message that a new chapter begins next session and that there is a clear path forward for the Legislature.

The path toward racial equity includes the expansion of Medicaid and the implementation of the Basic Health Option, the Washington Voting Rights Act, prohibiting mandatory e-verify, abolishing the death penalty, and bills that would protect worker safety and stability, expand access to dental care and broaden access to early learning.

The coalition also called on the Legislature to raise revenue and ensure that everyone pays their fair share. "Heading into the state legislative session facing yet another budget deficit, the Legislature cannot pass an all-cuts budget," said Rachael DeCruz, the Communications Director of Washington CAN! and MC of the Seattle release. "Raising new revenue from corporations and our state's wealthiest residents will bring equity to the system and enable the state to maintain investments in health care, education and other programs that are proven to provide opportunity and create prosperity for all Washingtonians."