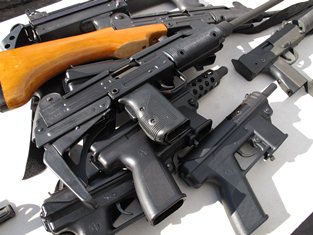 An Oregon sheriff says he will not enforce any federal regulation that President Barack Obama lays out in his package of gun control proposals Wednesday.Linn County Sheriff Tim Mueller joins several other public officials across the nation who have decided to square off with the White House even before it outlines what its plans are for expanded measures.

Mueller sent a letter to Vice President Joe Biden this week saying he won't enforce any federal regulation "offending the constitutional rights of my citizens." He won't permit federal officers to come to his county to enforce such laws either, he said.

Mueller's defiant stand exploded into a groundswell of support. His letter -- posted on the department's Facebook page -- earned more than 57,000 likes and shares -- and was growing by the minute.

Over the weekend, Sheriff Denny Peyman of Jackson County, Kentucky, said that he too will disobey any directive from the administration. He told residents in a townhall meeting that the sheriff has more power than the federal government.

In Texas, a lawmaker said this week he will introduce legislation that would make it illegal to enforce a federal gun ban.

"At some point there needs to be a showdown between the states and the federal government over the Supremacy Clause," Republican Rep. Steve Toth told WOAI 1200-AM. "It is our responsibility to push back when those laws are infringed by King Obama."

Obama's proposals Wednesday will largely cull from the work of a task force chaired by Biden.

An official familiar with the process said the president's proposal will include universal background checks and bans on assault weapons and high-capacity magazines.

Other recommendations by Biden's panel include tougher enforcement of existing laws, legislators briefed by the vice president said Tuesday.

In Linn County, the support to his letter caught the sheriff's office by surprise.

"Sheriff Tim Mueller is humbled and amazed at the support people near and far have expressed to his letter. Thank you!" said a post on the department's Facebook page.

A post by Jill Leiser Crowley of Eugene expressed the opinions of many.

"Thank you for standing up for our Constitutional Rights!!!" it said. "You are doing the right thing for the people of Linn County - I can only hope other counties will follow!!!"

But Karin Hunt, another Oregonian, questioned the sheriff's stance.

"I would expect (an) officer to enforce the laws of Oregon and the U.S.A. whether he agrees with the law or not," she said. "That's taking the law into your own hands."

The White House knows it can expect a fight.

"Part of the challenge we confront is that even the slightest hint of some sensible, responsible legislation in this area fans this notion that somehow, 'Here it comes, everybody's guns are going to be taken away,'" Obama said Monday.

Getting any legislation passed may prove to be difficult.

The influential National Rifle Association, among other gun rights groups, has vowed to fight any new gun restrictions -- like an assault weapon ban, which the group's president David Keene predicted Sunday wouldn't make it through Congress -- tooth and nail.

Although some officials have come out against new gun control laws, American as a whole are looking for some sort of change in the aftermath of the Newtown, Connecticut, shootings last month that took the lives of 20 grade school children and six adults.

By a 51 percent -45 percent margin, Americans questioned in a new Pew Research Center poll said it was more important to control gun ownership than to protect gun rights.

And by a 52 percent -35 percent margin, a new ABC News/Washington Post survey indicates the public says it is more likely to support some forms of gun control after last month's massacre. However, the polls showed continuing divisions on political and gender lines.

Still, one Oregon resident warned against passing laws that would conflict with the Second Amendment and the right to bear arms.

"Constitutional changes must be made properly with Congressional and judicial approval, and by a majority of the citizens of the USA, not by the order of a tyrant in Washington D.C.!!!" said Rick Carter of Pendleton. "I stand with the brave Sheriff!"

The battle lines could not be clearer.