By Helen Silvis of The Skanner News
Published: 11 February 2013

Sen. Ginny Burdick and Mayor Charlie Hales spoke to about 100 people Saturday, at a rally outside Portland City Hall to call for gun control measures.  Organized by Portland supporters of the grassroots group, One Million Moms 4 Gun Control, the rally called for universal background checks on gun buyers, action to ban guns in Oregon schools, and bans on military-style assault weapons and high capacity magazines.

Sen. Ginny Burdick, who is sponsoring several bills in the Oregon Legislature, urged everyone who supports gun control measures to contact their state and national elected officials and press them to add their support. Even legislators who support gun control are reluctant to speak out, she said. "Democrats are "trying to hide from the issue."
Burdick drew applause when she said the NRA had given her an F- grade. Nonetheless she said, she won reelection with 70 percent of the vote. 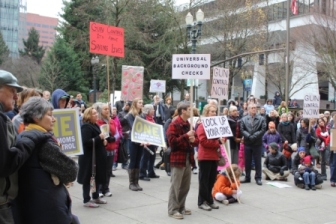 "We are not gun grabbers," Lynch said. "We support your Second Amendment right to own a handgun to protect your business or your home; a rifle to hunt with…. All we are asking for are common sense regulations on the sale of military-grade assault weapons; common –sense bans on the manufacture and sale of high-capacity magazines…Like 85 percent of NRA members we support background checks on sale of a weapon…"

Mayor Charlie Hales said the measures are "common sense" and are supported by "thousands of people across the city." He said he has been out with the Portland Police Department when shots have been fired, hitting vehicles and buildings. That's an everyday occurrence in some communities, he said.

Check the figures: the people getting shot are predominantly young Black and Latino men. 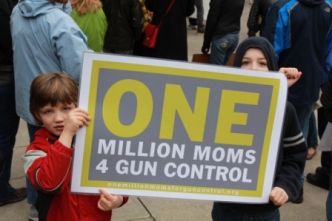 Very few African Americans or other people of color were present at the rally, although nationally African American mayors have been at the forefront of efforts to curb violence. Many prominent African American mayors support Mayors Against Illegal Guns, the group founded by New York Mayor Michael Bloomberg.  Ron Dellums of Oakland; Shirley Franklin of Atlanta, Ray Nagin of New Orleans, Sheila Dixon of Baltimore, Cory Booker of Newark, N.J., Mark Mallory of Cincinnati: Michael Nutter of Philadelphia and Larry P. Langford of Birmingham, Ala., are outspoken advocates for measures such as background checks. Seattle Mayor  Greg Nickels,  Los Angeles Mayor Antonio Villaraigosa, and San Francisco Mayor Gavin Newsome are among the West Coast mayors who support gun control.

Gun violence has been identified as a major health risk for African American boys and young men. In Chicago last year, for example, The Chicago Reporter, found that last year, 243 people under 25 were killed, predominantly in shootings, an 11 percent increase over 2011 and a 26 percent jump from 2010. The majority were African American males.

"The masculine culture around guns has contributed to "a belief [among teens] that a lot of other boys are carrying guns, which can be a self-fulfilling prophecy—or not," Harold Pollack, co-director of the University of Chicago's Crime Lab, told the Chicago Reporter.

The result?  Most of the youth charged with felony gun crimes are black boys: 80 percent of the defendants were Black, even though many of them had not used the guns to harm a person.