Family of Six Children Orphaned by Cancer Try to Stay Together 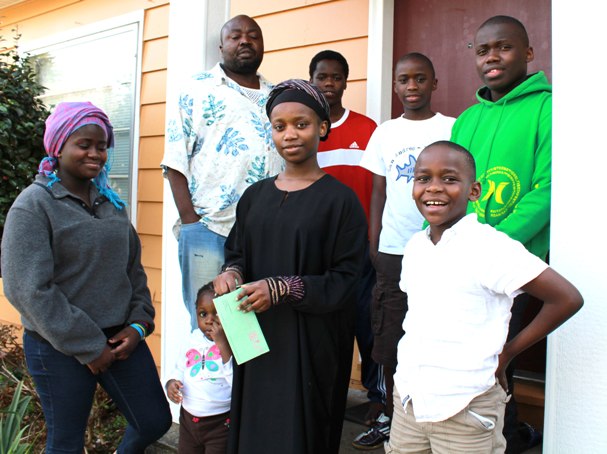 Djimet Dogo, who works for the Immigrant and Refugee Community Organization at Africa House, got a telephone call from the oldest boy at 7:45 a.m.

"They all want to stay together," he says. "They don't want to be separated."

Members of the local community are trying to step in and find a solution for the kids that will keep the family together while establishing some kind of stability.

Mwinja had no riches to leave her children. But she did leave them with a dream – that they would get an American education.

"At the end all she kept saying was, 'Stay in school, stay in school,'" says Husein, the eldest boy. "And look after your younger brothers and sisters."

Husein has been considered head of the family since his father was killed eight years ago, when the teen was just 11. Husein remembers everyone was asleep, when men with guns broke into his family home in Congo. They shot his father in front of the terrified family, he says.

"It was the day that my little brother Amissi was one month old," he says.

The family fled to a refugee camp in Burundi, where they lived for four years, before being allowed to come to the United States in 2009.

Husein broke his leg playing soccer in the camp. It took several years and two surgeries to heal properly, he says, showing the scars that mark his leg from ankle to knee.

At home they speak Swahili and some French. So the first challenge was to learn English. It wasn't easy at first, but now all the children are doing well.

A senior at Madison High School, Husein started this year with a 3.5 GPA. This year he's missed a lot of school taking care of his dying mother. He can make up his studies, he feels, but he won't ever get that time back with his mother.

Still Husein's grades have earned him offers from Oregon State University, the University of Oregon and Concordia University. He wants to be a doctor. But he doesn't know how he can balance going to school with looking after his family.

Amida, 18, is also a senior. She goes to Franklin High School and her report card shows straight A's. She's not sure what she wants to study – maybe accounting or nursing, she says. Amida does most of the cleaning and cooks for the family.

"She's the best cook," Husein says of his sister. "She's not like my mom, but she tries."

For the next 40 days the children will receive visitors from the Congolese immigrant community at the family home in East Portland.

Jean Claude Thoyilele-Wa-Thoyilele, a community elder who has been in the United States 20 years, says everyone wants to thank Providence Cancer Center for the way they cared for their mother.

"Aisha was a very nice person," he says. "Providence did a lot for her and all the family say thanks for the help."

They're also grateful to the translator, whom they know only as Mr. Odiambo.

"All these children are respectful. They have no problem in school or anywhere," Jean Claude says.

"These kids deserve a good chance. They came to America because it's the land of opportunity and they have dreams."

He praises Mussa, 12, who wants to be a lawyer, saying his teachers have told him Mussa is very talented. And he says the family will thrive so long as they can stay together.

"I know Husein. He's a big fighter. He's very good," Jean-Claude says. "Any opportunities that come along he will take them. If he gets an opportunity to go to college he will help them three times."

Dogo worries about how they will manage in the coming years. Refugees all start from zero when they arrive, he says. They all want to help the family, but financially, they simply don't have a lot to offer.

"The Muslim Community Center is very supportive," Dogo says. "So the entire community is coming to their home to support them for the next 40 days. So far there is support, but after…"