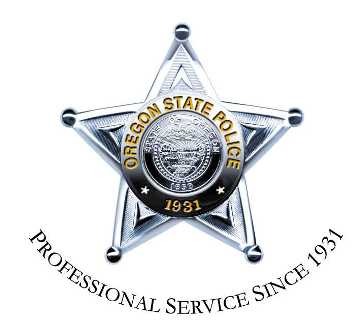 This press release just in from the Oregon State Police:

Scammers claiming to be with the Oregon State Police are placing pre-recorded phone calls to Oregonians telling them they owe money for unpaid traffic tickets and asking that a Green Dot MoneyPak card be used to make the payment. These calls, which may begin with a siren sound, are fraudulent and should be ignored, warned the OSP and the Oregon Department of Justice.

On March 26, 2013, OSP got a report of the scam when a citizen reported getting a phone call from a restricted number. Following a siren sound, an automated voice identified himself as "Alex James Murphy with the Oregon State Police." The caller stated a "bench warrant" had been issued on an unpaid speeding ticket issued on Interstate 205. The pre-recorded call gave further instructions to purchase a Green Dot MoneyPak reloadable debit card and place $154 on the card, then call back to another phone number in the (203) area code and provide the Green Dot card number and security code to pay the citation and avoid further legal action.

OSP reminds you to be aware that:

* OSP or any other legitimate law enforcement agency does not call citizens seeking payment for outstanding traffic citations.

* OSP does not call individuals and demand money from citizens under any circumstances.

* Individuals claiming to collect debts may try to instill fear in potential victims to persuade them to forward money.

The Oregon Judicial Department advises that courts may use an independent collection service to collect unpaid monetary judgments and fines. If someone believes they are being scammed regarding an alleged unpaid traffic citation or other court-imposed financial obligation they can:

* Ask the collector (caller) for information specific to the alleged unpaid traffic citation. The caller should have the court case number, date of ticket and vehicle license number.

According to Oregon Department of Justice, Green Dot MoneyPak cards and similar cash-load cards have been the focus of scammers around the country to defraud unsuspecting people. Avoid reacting to requests requiring you to purchase MoneyPaks, but if you do purchase one for any reason treat it like cash because unlike credit cards, MoneyPak transactions can never be reversed.

The Green Dot Corporation is aware of similar scams and has a link on their website to tips from the Financial Fraud Enforcement Task Force (StopFraud.gov).

If you receive a similar call, disconnect without providing any information or taking any instructions from the caller. Contact your local Police Department, Sheriff's Office or Oregon State Police. You may also file a complaint with the Oregon Department of Justice Consumer Protection Office via the Consumer Hotline at 1-877-877-9392 from 8:30 a.m. to 4:30 p.m., or complete an online Consumer Complaint Form anytime at http://www.doj.state.or.us/consumer/Pages/complaint.aspx.)