Black History Month will be celebrated with art, music and discussion at Reed College throughout February.
Visitors to the college include civil rights leader Julian Bond, musician Randy Weston, musical scholar Robin D.G. Kelley and local musicians from the Portland Jazz Festival.
Included in the schedule are:
• Exhibition, "Confrontation at the Bridge," Jacob Lawrence, Thursday, Feb. 1 through Wednesday, Feb. 14 Vollum Lounge. Viewing hours will vary. For information and specific viewing hours, call 503-517-7935.
• Recognized as one of the most important artists of the 20th century, Jacob Lawrence is best known for his narrative paintings depicting important moments in African American history.
Lawrence's family moved north in 1930 during the Great Migration. He later studied at the American Artists School and the Federal Art Project of President Franklin Roosevelt's Works Progress Administration. At age 24, he became the first African American to have work included in the permanent collection of the New York Museum of Modern Art. 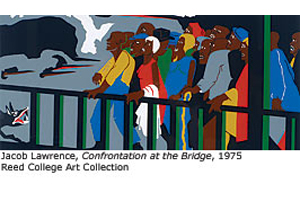 This exhibition displays "Confrontation at the Bridge," an original silkscreen (edition no. 69 of 175) by Lawrence from the Reed College permanent art collection, as well as reproductions of museum exhibition posters depicting major works from his Harlem and "Migration of the American Negro" series. 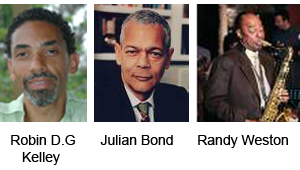 • Julian Bond, "Civil Rights: In the Day, Today, and Tomorrow, " 8 p.m. Friday, Feb. 2, Kaul Auditorium.
A major leader of the American civil rights movement, Julian Bond has been at the forefront of social change for five decades. While a student at Morehouse College during the early 1960s, Bond helped found the Student Nonviolent Coordinating Committee (SNCC), and was co-chair of a successful challenge delegation to the 1968 Democratic Convention.
He served in the Georgia Legislature as both a representative and as a senator. He has served, since 1998, as chairman of the board of the NAACP, the oldest and largest civil rights organization in the United States.
In 2002, he received the prestigious National Freedom Award. The holder of 23 honorary degrees, he is an adjunct professor at American University in Washington, D.C. and a professor of history at the University of Virginia.
Seating in Kaul Auditorium is on a first-come, first-seated basis; overflow seating and live video of the lecture will be provided at another campus location.
• Performance: Randy Weston Quartet, 8 p.m., Saturday, Feb. 3, 8 p.m. Kaul Auditorium.
For six decades, Randy Weston has remained one of the world's foremost pianists and composers. Widely regarded as a musical innovator and visionary, Weston was named a National Endowment for the Arts Jazz Master in 2001.
Born in New York, he was immersed in a rich musical culture, counting Cecil Payne, Coleman Hawkins, Duke Ellington and Thelonious Monk among his friends and teachers. In 1967, after a tour of 14 African countries, Weston made his home in Morocco, where he lived for six years, and infused his style with the music of the region. Today, Weston's compositions continue to inform and inspire, bringing American and African musical traditions together.
• Lecture: Robin D.G. Kelley, "'Jazz and Freedom Go Hand and Hand': Thelonious Monk Plays the '60s" 8 p.m., Monday, Feb. 12, Vollum Lecture Hall.
A tenured professor since the age of 32, Robin Kelley is a widely respected scholar, activist and author whose work as a historian is focused on the Black working class and the neoconservative demonization of the urban poor.
His most recent project—a biography of Thelonious Monk—results from years of support from the Monk family, including unprecedented access to the Monk Institute's historical documents and archives.