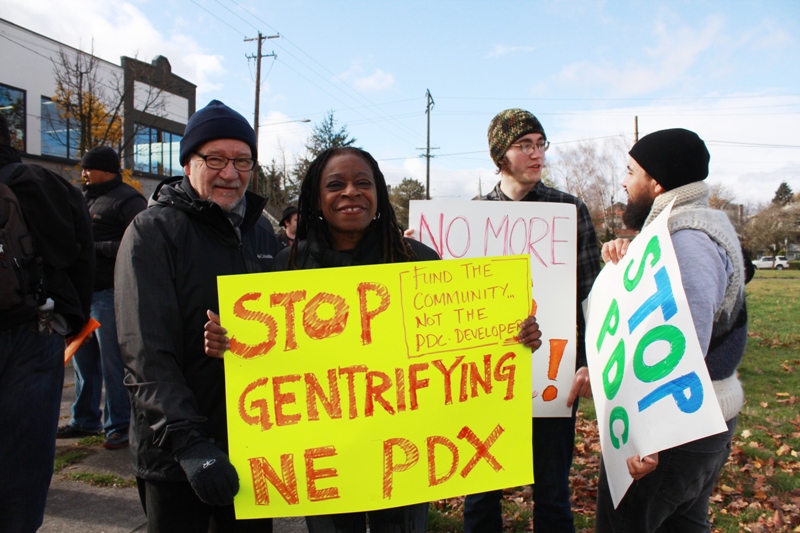 The activists, who say they are not affiliated to any particular organization, say the Portland Development Commission land deal with Majestic Realty is a $2.4 million giveaway to one of America’s wealthiest families.

What’s at issue? A PDC development deal proposes to bring a Trader Joe grocery store to the corner of Martin Luther King Jr. and Northeast Alberta St. Under the deal, Majestic Realty would purchase the land for $502,160, which is about $2.4 million less than it was valued in a December 2012 appraisal.

“It’s a giveaway to the 1 percent,” says organizer Steven Gilliam. “Some people might welcome a trendy grocery store and that’s fine, but the PDC does not need to subsidize it with $2.4 million dollars in this era of budget cuts.”

But PDC spokesman John Jackley says the development deal is simply a smart way to bring jobs, taxes and a grocery store to a neighborhood that has been asking for those things for more than 14 years. As for that $2.4 million figure – it is not what it seems, Jackley says.

“Under the zoning for that site, the highest and best use of that site is for high density, market rate apartments, not for grocery stores, Jackley says.

“The appraisal identified the value of the land at $2.9 million if the project was going to build hundreds of high-density, market-rate apartments.”

Jackley said the land is not worth as much without a plan to site expensive apartments there. And he said a sewer line that runs across the site also decreases the land’s value.

“You can’t build on top of sewer lines,” he says. “You can’t even put dumpsters on them. That affects the price as well.”

The Portland Development Commission paid $2,055,000 for the land.

Jackley said discussions about the site have been underway since 2006, with three different developers trying to put together plans at different times.

In 2006 Vanport South, a team led by local developers Ray Leary and Jeana Wooley, negotiated with 24-Hour Fitness to put a gym on the site. Vanport South had exclusive rights to develop the site until 2009. However, the deal never materialized. In 2010, another developer, Promontory LLC, tried to bring a health clinic as its anchor business. And Vanport South took another shot at the site, looking for a way to bring a Trader Joe grocery store.

A grocery store was the favored plan at a public meeting for the King neighborhood held at Curious Comedy in 2010, Jackley says.

“It did not come out of nowhere. It was the result of the neighborhood and the businesses three years ago identifying Trader Joe’s as the best anchor tenant for that site.”

In March, 2011, the PDC put out an RFI asking grocery chains to bring stores to Portland –not just to the Vanport site - but also to Lents town center.

Founded by Los Angeles real estate developer, Edward Roski, Majestic Realty’s rise is a rags-to riches story. Roski Sr. started Majestic as a local real-estate brokerage. His son, Edward Roski Jr., grew it into a diversified real estate business with offices in six states, and a 73-million-square-feet development portfolio. Roski co-owns the LA Kings and the LA Lakers, and was a key player in developing the Staples Center.

Eventually Majestic secured the deal with Trader Joes and the PDC voted on the land deal last week.

Jackley says the investment is worthwhile.

“The annual property taxes plus the local payroll from Trader Joe’s alone—not even including other stores that will be part of that development—that public investment is paid back to the community in three years, and probably less than two,” he says.

“So if you look at it from the standpoint of: ‘What does the community get back?’ Well, it gets about $87,000 in property taxes and over $1 million a year in payroll – at a minimum. So the return to the community is significant.”

The protesters point out that since the grocery store decision was made, a New Seasons grocery has opened on North Williams at Fremont St. Safeway is a longtime tenant, about half a mile north of the site. And small convenience stores along the street have been working with Multnomah County to make sure they carry healthy food, such as fruit and vegetables.

Jackley says Trader Joe’s is an affordable alternative to the larger stores. And he says the PDC is always willing to work with food coops and small produce stores, such as the Green Zebra on N. Lombard.

But the protesters question the value of giving a substantial discount on land to wealthy developers.

But that’s not the only harm the protesters see in the deal. They fear it likely will contribute to displacing lower-income families who call the neighborhood their home.

A study by economist Daniel Hartley for the Federal Reserve Bank of Cleveland, this month listed Portland and Seattle among the top 10 cities in the nation for gentrification.

History says that development raises property values, leading to property tax hikes that are unaffordable for many residents, protesters say.

“It’s really important that the public be aware of the Portland Development Commission and the role they have played in gentrifying Northeast Portland,” Gilliam says. “They have been doing it since their inception. It started with Emanuel Hospital, I5, Memorial Coliseum, and it continues today in this form.”

Professor Karen Gibson from Portland State University’s Nohad A. Toulan School of Urban Studies and Planning is an expert on Portland’s history of gentrification. So what does Prof. Gibson recommend?

What’s needed now is a moratorium on development, she says, until the PDC offers a full accounting for all urban renewal project spending in Northeast Portland –starting from the Emanuel Hospital development.

“No money to subsidize a specialty grocery store or outside billionaire developers until the PDC accounts for the spending, and shows how its track record with urban renewal in Interstate lives up to the original commitment to the existing residents,” she says.

“Back in 2000, when this was negotiated, when the community agreed to accept urban renewal, for the first time since the Emanuel Hospital project destroyed that community, the community insisted that the benefits go to existing residents. This has not been demonstrated.”

Gibson says the community should have a stronger voice through a co-operative development agreement with the city.

“This would set up standards for how the city relates to the community (communications, transparency, accountability in development plans/projects),” she says.

If the Vanport project goes forward, it should include a community benefits agreement negotiated with the developer.

And Gibson believes it could be time for community activists to lawyer up. “It is ridiculous for the PDC to point to an agreement made with the original Interstate URA Committee about what kind of development should occur,” she says.

“The real estate market has changed tremendously, and so has the retail market. I find it hard to believe that Majestic would be involved in this project unless it stood to make a handsome profit. What about the people that have paid the price for renewal of the area----those displaced?”