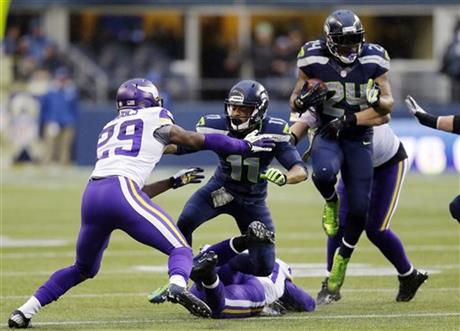 Seahawks fans heading to the Superbowl game in New Jersey on Feb. 2 might need to put a second mortgage on the house to afford prices already as high as $12,000 a seat.

The cheapest tickets on the resale market for this weekend’s playoff in Seattle are hovering around $200, considered the most expensive in the country.

But the Better Business Bureau says no matter how much you are willing to spend, you need to watch out for fakes and rip-offs.

Be especially careful of online deals, BBB spokesman David Quinlan says, and make absolute sure you can see and touch the tickets before forking over thousands of dollars for them.

He says that any deal that looks too good to be true probably is.

“That’s why if you’re going to make a deal with someone, obviously meet them in public, look at the tickets, inspect them; know what a real ticket feels like – it’s kind of that hard cardboard,” Quinlan says. “Make sure the ink doesn’t smear.

“If it’s flimsy, if it looks any bit suspicious, don’t spend any money on that and just walk away.”

Tickets sold out within minutes for this weekend’s playoff game – and that was before fans knew they would face the New Orleans Saints; the last time the two teams squared off the crowd caused earthquakes.

“Fans are going to want a ticket to that game and they are going to be trying to find any deal possible. So it never fails, year in, year out, it doesn’t matter what city you’re in, if your team is playing, those resellers are going to be out there,” Quinlan said. “Some sell legitimate tickets; others will be trying to sell bogus tickets, Xerox copies even.”

Game tickets lack any special watermark or hologram, making them easier to counterfeit.

And if you do buy bad tickets there isn’t much you can do about it, Quinlan says.

“If you buy from a scalper and it turns out to be a bogus ticket, by the time you reach the gate that guy’s gone.”

The Better Business Bureau has a short list of guidelines for football fans heading to a Seahawks game:

-- Spot the fakes. Learn how real tickets look and feel; watch for flimsy paper, smeared ink and uneven margins. When in doubt, walk away.

-- Go with star players. Use reliable and verifiable ticket sellers and resellers that hold vendors responsible for ticket authenticity.

-- Avoid the sack. Never wire funds to make purchases. Use credit cards online and dispute the charges if tickets don’t arrive or turn out to be fakes.

-- Call a timeout. Avoid sellers that fail to provide contact information or prefer to conduct transactions privately. When buying tickets from local sellers, meet them in well-lit public places and bring a friend.

Quinlan says there are reputable ticket sellers to be found on the organization’s website, www.bbb.org.

Find them by going to the site, plugging in keywords for the kind of business services you are looking for – in this case good search terms include “ticket sellers,” “game day events,” and even simply “resellers,” and your area code.

“Be prepared to spend a lot of money,” he said.