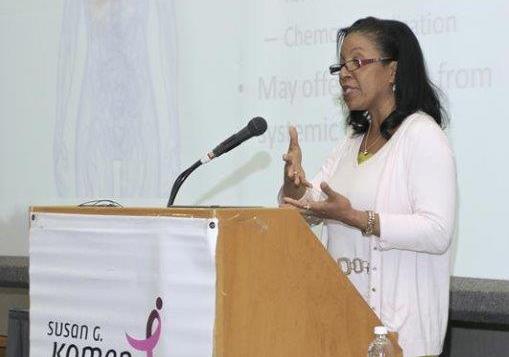 A few tickets will be available at the door for the Susan G. Komen Oregon and Southwest Washington 16th Annual Breast-Cancer Issues Conference, coming up Saturday, March 1, from 8 a.m. to 3:30 p.m. the Lloyd Center Doubletree Hotel in Portland.

This year, organizers say a significant focus is on survival and health of African American women; one entire track is focused on the community’s special needs around breast cancer awareness.

Another standout speaker is Nathalie Johnson, M.D., a breast surgeon who is medical director of Legacy Cancer Institute and Legacy Breast Health Centers.

“I think definitely in the African-American community, and with other women of color, we need to understand our risk,” says Kim Moreland of the Sisters Network of Oregon & SW Washington, a support group for Black women with breast cancer. “This may motivate them to get a mammogram, because African American women and people of color have, in a lot of cases, a higher death rate compared to others.”

There are four session tracks to the conference, which boasts a surprising range of offerings from scientific information to emotional needs, diet and health.

One track of three sessions is entirely about what African American women need to know about breast cancer. Session one, “Triple Negative Breast Cancer,” covers this most aggressive of diagnoses, including treatment options; second is “Breast Cancer: Not Just a White Woman’s Disease,” presented by Nathalie Johnson from Legacy; and “Hereditary Breast Cancer Syndromes: Beyond the Breast/Ovarian Duo,” which looks at genetic risk factors.

Johnson will also deliver the session about environmental impacts, “What’s getting into You?”

The issue is a matter of life and death, as research shows African American women are more likely to die from breast cancer than women from other groups.

That more aggressive kind of breast cancer is called “Triple Negative,” because it's estrogen negative, progesterin negative, and Her2 negative; it is unclear why Black women are disproportionately impacted by Triple Negative Breast Cancer.

“A lot of times, the targeted chemotherapy does not respond well to this particular type of breast cancer,” Mountain said. “As a result, African American women not only are diagnosed with a more aggressive breast cancer, but their mortality rate is much higher.”

A big part of the Conference this year is about getting the word out in Black communities around the need for regular cancer screenings and early detection – including mammograms.

Komen is working with the Sisters Network; also with Worship in Pink, a local awareness project by Kathy Kendrix, and area church congregations on outreach.

“We are trying to make sure women they go to the physician for a high-quality breast exam so that these cancers can be detected early, because if you are detected early, with breast cancer, the five-year survival rate right now is up to 99 percent,” Mountain says.

Once breast cancer spreads to other parts of the body, the survival rate drops to 23 percent.

“She wanted to create an organization where she could respond to the increasing incidence of breast cancer in the African American community,” Moreland says of the group’s founder. “She felt when she went through her experience, she was alone and really did not see anyone in the room that looked like her.

“We are finding out that in Oregon, it's a similar experience with African American women,” Moreland says. “So we wanted to create an organization that responds to the need -- we have Triple Negatives, we also have a higher incidence of mortality as compared to white women, and we also in Oregon have a high rate of late stage diagnosis.”

Now, with the Affordable Care Act, more women have access to health care than ever – a major barrier for Black women, Mountain says -- hopefully more women will start using that health care to stay current with wellness tests and other health services.

“We're shouting out about the importance of early detection,” Mountain says. “

“We want to make sure that breast cancer is caught early – and the survival rate is higher.”

The event is sponsored by Moda Health, OHSU Knight Cancer Institute, and Kaiser Permanente NW. For more information go to www.KomanOregon.org, and www.sistersnetworkinc.org .