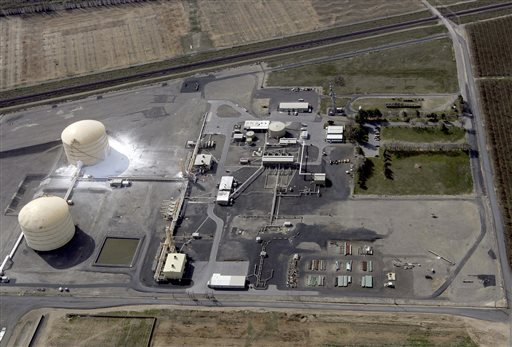 A large explosion rocked a natural gas processing plant on the Washington-Oregon border Monday, injuring five workers, causing about 400 people to evacuate from nearby farms and homes, and emitting a mushroom cloud of black smoke that was visible for more than a mile.

The 8:20 a.m. blast at the Williams Northwest Pipeline facility near the Washington town of Plymouth, along the Columbia River, sparked a fire and punctured one of the facility's two giant storage tanks for liquefied natural gas.

Benton County Sheriff Steven Keane said a relatively small amount of gas leaked from the tank to the ground in a moat-like containment area. But it then evaporated, blowing away to the northeast, he said.

“I think if one of those huge tanks had exploded, it might have been a different story,” Keane said.

The fire at the facility about 4 miles west of Plymouth was extinguished within a couple of hours.

One of the injured workers was transported to a Portland, Ore., hospital specializing in burns, he said.

Benton Fire District 1 Capt. Jeff Ripley said another four people were taken to local medical facilities. None of the injuries was believed to be life-threatening.

More than a mile away across the Columbia River, the explosion shook Cindi Stefani's home.

“It was just a very loud boom,” she said. “I looked across the river and saw a giant mushroom cloud and flames at least a couple hundred feet high.”

Animals on neighboring farms were running around, she added.

“At that point we were pretty scared. I was thinking, 'We need to get out of here.'“

Deputies went door to door to homes and farms within a 2-mile radius, evacuating about 400 residents as a precaution.

By Monday night, the evacuation zone had been reduced to a 1-mile radius, the Benton County Emergency Management agency said. Road and river restrictions were lifted.

About 75 people checked into a shelter set up in Oregon at the Umatilla County Fairgrounds, but emergency officials said few were expected to stay the night.

The evacuation was described as voluntary.

The facility provides supplemental gas during times of high demand for a 4,000-mile pipeline stretching from the Canadian border to southern Utah. Its two storage tanks for liquefied natural gas each have a capacity of 1.2 billion cubic feet, Williams spokeswoman Michele Swaner said. The one that punctured was about a third full.

Swaner said the 14 employees working at the time were all accounted for. A total of 17 or 18 people work at the facility.

She added it was too early to determine the extent of the damage or the cause of the explosion. The pipeline was shut down in the area of the storage facility, but was still carrying gas on other stretches.

Video taken by a Washington State Patrol bomb squad robot was being evaluated.

Emergency crews and Williams personnel entered the hazard area to assess the situation Monday night, the emergency management agency said in a statement.

A pipeline engineer with the Washington Utilities and Transportation Commission will investigate the cause of the explosion and communicate with the western region of the U.S. Department of Transportation Pipeline and Hazardous Materials Safety Administration, the commission said.

Williams operates about 15,000 miles of interstate natural gas pipelines, according to its website.

There was no pipeline rupture, and no customers were affected, company officials said.

A secretary with the Patterson School District, about 7 miles away, said it provided three school buses to help with the evacuation. Students are on spring break, Rachelle Munn said.