Jury Selection this Week in NY Trial of Egyptian Preacher 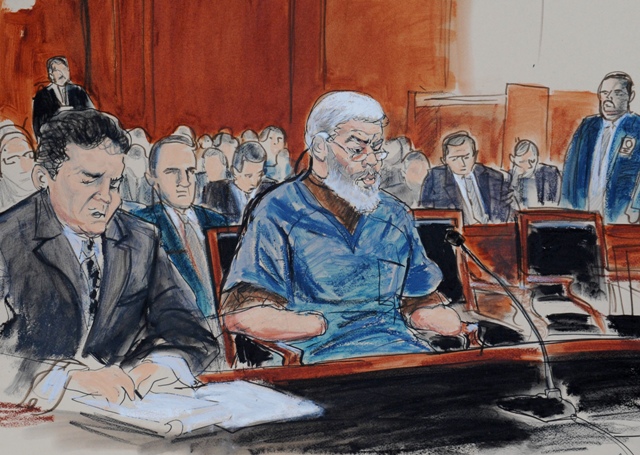 NEW YORK (AP) — Jury selection begins Monday in the trial of a disabled Egyptian Islamic preacher extradited from Great Britain on charges he conspired to support al-Qaida, in part by trying to create a training camp in Oregon 15 years ago.

The trial of Mustafa Kamel Mustafa occurs a month after a Manhattan jury convicted Sulaiman Abu Ghaith, Osama bin Laden's son-in-law and al-Qaida's spokesman after the 2001 attacks, of charges that will likely result in a life sentence.

The 55-year-old Mustafa has alerted his lawyers and U.S. District Judge Katherine Forrest that he will testify on his own behalf. At a pretrial hearing last week, he told the judge: "I think I am innocent. I need to go through it, have a chance to defend myself."

Prosecutors say he conspired to support al-Qaida by trying in 1999 to set up a terrorist training camp in Bly, Ore., by arranging for others to attend an al-Qaida training camp in Afghanistan and by ensuring there was satellite phone service for hostage takers in Yemen in 1998 who abducted two American tourists and 14 others.

(former Washington State resident James Ujaama pleaded guilty in 2007 to a single count of providing material support to the Taliban in the Bly training camp case; Oussama Kassir was in convicted in 2009 and fugitive Abu Hamza al-Masri is still wanted.)

Three Britons and an Australian were killed as the Yemeni military attempted to rescue the hostages. Two women, an American and a Briton, were wounded. Officials said the hostages were seized as demands were made to release two Islamic jihad leaders.

Assistant U.S. Attorney Ian Patrick McGinley said the government had plenty of evidence to sift through, including media interviews and recordings of his weekly speeches.

"We culled it down from thousands of hours to less than an hour's worth of recordings that we intend to play," McGinley told the judge.

Still, defense attorney Jeremy Schneider said the jury will be subjected to references by his client and others to Osama bin Laden and al-Qaida, along with repeated mentions of the 9/11 attacks and the 2000 suicide bombing of the USS Cole in Aden harbor in Yemen.

He said the statements were chosen by prosecutors "because these statements are the ones that are the most unduly prejudicial."

Schneider also has belittled the government's portrayal of plans to open an al-Qaida training camp on 360 acres in Bly, saying the effort in late 1999 and early 2000 resembled a retreat, with "just a few people shooting at targets, riding horseback, having fun at the farm."

Assistant U.S. Attorney Edward Kim said Schneider's description was false. He said guns found in the homes of participants in the Bly training "tends to disprove ... that this was all just a lark in the woods."

Assistant U.S. Attorney John Cronan said prosecutors plan to show jurors that Mustafa supported acts committed by al-Qaida such as the Cole attack and that he said the WorldTradeCenter was a legitimate target.

The white-haired Mustafa, also known as Abu Hamza al-Masri, turned London's Finsbury Park Mosque in the 1990s into a training ground for Islamic extremists, attracting men including Sept. 11 conspirator Zacarias Moussaoui and shoe bomber Richard Reid. Mustafa has one eye and claims to have lost his hands fighting the Soviets in Afghanistan.

Jailed since 2004 in Britain on separate charges of inciting racial hatred and encouraging followers to kill non-Muslims, Mustafa was brought to the United States for trial in fall 2012.