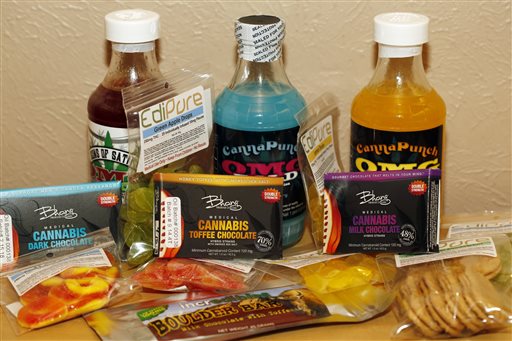 This April 18, 2014 file photo shows edible marijuana products on display at a medical marijuana dispensary in Denver. Colorado's marijuana experiment is under threat by the very popularity of eating it instead of smoking it, so the pot industry is joining health officials and state regulators in studying the problem of consumers eating too much too quickly. They plan to meet Wednesday, April 30, 2014, at Children's Hospital Colorado to discuss the potency and serving size of pot edibles. (AP Photo/Ed Andrieski, File)

DENVER (AP) — Colorado's marijuana experiment is threatened by the popularity of eating it instead of smoking it, leading the pot industry to join health officials and state regulators to try to curb the problem of consumers ingesting too much weed.

A task force that's meeting Wednesday planned to start work on refining Colorado's rules on edibles, the industry term for marijuana that has been concentrated and infused into food or drink.

"Basically, we are trying to figure out how to come up with a reasonable THC concentration or amount in edibles in proportion to product safety size," said Dr. George Sam Wang of Children's Hospital Colorado, a pediatric emergency physician who has treated children and toddlers who fell ill after eating marijuana.

Marijuana-infused foods are booming in the state's new recreational market.

Some choose edible pot because of health concerns about smoking the drug. Others are visitors who can't find a hotel that allows toking and are stymied by a law barring public outdoor pot smoking. Whether through inexperience or confusion, many are eating too much pot too quickly, with potentially deadly consequences.

A college student from Wyoming jumped to his death from a Denver hotel balcony last month after consuming six times the recommended dosage of a marijuana-infused cookie. And earlier this month, a Denver man accused of shooting his wife reportedly ate pot-laced candy before the attack, though police say he may have had other drugs in his system.

The deaths have underscored a common complaint from new marijuana customers — they say they don't know how much pot to eat and then have unpleasant experiences when they ingest too much.

Colorado already limits THC — marijuana's intoxicating chemical — in edible pot products to 10mg per serving, with a maximum of 10 servings per package. Exact comparisons are tricky because marijuana varies widely in potency and quality, but 10mg of THC is considered roughly equivalent to the amount in a medium-sized joint.

Edibles must be sold in opaque, childproof containers that explicitly warn the product contains marijuana and hasn't been tested for safety or potency. Colorado also bans retailers from adding concentrated pot to a premade food item, such as injecting cannabis oil into a branded candy bar, though the move is common among home cooks.

In Washington state, where retail sales don't begin until July, edible pot products will have the same 10mg serving size, with a maximum of 10 servings per package, said Brian Smith of the Washington State Liquor Control Board, which is regulating recreational pot sales.

Meanwhile, Colorado authorities are scrambling to do more to rein in edibles given the recent deaths and complaints. State lawmakers are considering legislation that would require edibles — the cookies and candies themselves, not just the wrappers — to be marked and colored to indicate they contain pot.

Another bill would reduce possession limits on concentrated marijuana, such as cannabis oils used in brownies or cookies. Both bills have passed the House and await Senate hearings Thursday.

Marijuana industry groups have supported the bills, even as they warn that edible pot is just as legal as the leafy, dried drug that's rolled into joints and smoked.

"All of us want to make sure people are safe," said Meg Collins, executive director of the Denver-based Cannabis Business Alliance and a member of the task force. "The industry is stepping up and is looking at the best ways to educate and communicate to its customers safe ways to recreate with marijuana."

"What's the best way to approach this? I think we have to figure out whether that's the right dose and what is the most scientific way to decide what's in a dose," Wang said.

The task force had no immediate deadline for suggesting new regulations on edibles.