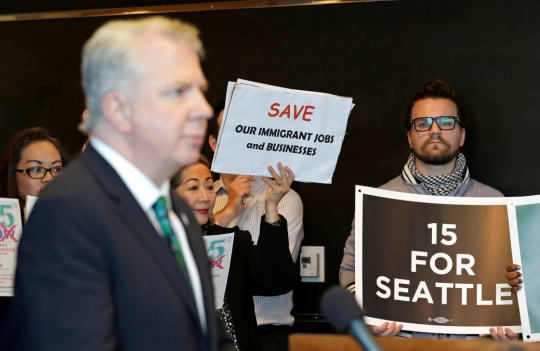 PHOTO: Seattle Mayor Ed Murray has surprised activists by calling on the police to back off from evicting a disabled Vietnam veteran.

The Occupy-related group Standing Against Foreclosure and Eviction (SAFE) and the Washington Community Action Network had spent weeks of focused organizing in support of the elderly homeowners, Byron and Jean Barton.

Byron Barton, a Vietnam veteran, had suffered a stroke that left him unable to walk and with a severe speech disability; the couple’s property had fallen into the hands of a mortgage trustee corporation – one that has been repeatedly sued for wrongdoing -- and went into foreclosure.

The deed for the Bartons’ West Seattle home had been snapped up at auction by mortgage trustees Quality Loan Service, who sold it to Triangle Property Development, who foreclosed on the couple and filed for the eviction.

The Bartons are currently suing Quality Loan Service as well as JPMorgan Chase, and had asked Triangle to suspend the foreclosure while the case remains in court.

The Bartons say Triangle Property Development responded to the lawsuit by fast-tracking the eviction rather than waiting to see the case’s outcome.

Chris Genese of Washington Can says activists supporting the Bartons have won a battle against foreclosure but the war itself continues.

“Washington CAN has been working as part of a coalition in a campaign to get the county to address underwater mortgages,” he said Tuesday.

“Reports have been released, Council has gone into deliberation but we have been stalled out in getting anything meaningful on the table.”

Genese said activists had come across the Bartons’ case as part of a larger campaign against eviction they have waged for about a year and a half.

As the activists set up a press conference, Genese says the King County Sheriff decided in late June not to carry out the eviction.

“The sheriff’s action was the first bit of good luck we have had in this fight.”

But he said Triangle upped their pressure on the authorities by taking them to court.

It all came to a head last Thursday, Genese says, when county officials told the activists they would carry out the eviction; overnight, the activists organized a blockade.

By Friday morning, the Bartons’ front yard became the scene of a tense standoff between activists, King County Sheriffs, Seattle Police and the emergency technicians driving an ambulance called – without apparent explanation to his wife or supporters -- to take Byron Barton to the Veterans Administration hospital.

“Sheriffs showed up, police showed up -- there was one point in which an ambulance was brought to take Byron away,” Genese said.

“Byron obviously didn’t want to leave – they were taking him against his will.

“Finally the police and sheriffs and paramedics decided to take Byron out of the ambulance,” Genese says.

“It was a pretty intense moment.”

By Monday, Mayor Murray met with the Bartons and afterward announced he was calling off the police until the couple’s legal case is completed.

“I’ve pledged the City of Seattle’s participation in the Mayors Challenge to End Veteran Homelessness in 2015, and will launch a separate process to address homelessness and increase housing affordability in the months ahead, one of my visions toward making Seattle an affordable city.

“In Washington State, we’ve seen recent victories such as the 2011 Washington State Foreclosure Fairness Act, which I worked on closely, designed to help homeowners and their lenders explore alternatives to foreclosure and reach a resolution when possible. I’m committed to working with all stakeholders, using this and other alternatives in the work Seattle does on housing affordability.”

“We’re glad the mayor stepped up to help this family but there are still thousands of families in the same position,” Genese said.

“This moved really quickly – I think we are all still processing it.”

The Attorney General’s investigation found Quality Loan Service “closed its former office in Poulsbo in January 2014 and moved to an office in Seattle. It did not inform borrowers who were in the foreclosure process of the move.

“Additionally, some borrowers were unable to gain entry to reach QLS’s Seattle office, which was in a locked, poorly marked office building,” the report said.

“The AGO alleged QLS’s failure to notify borrowers of the office move and the inaccessibility of the new office were unfair and deceptive business practices and therefore violated the Consumer Protection Act.”

The Attorney General filed a restraining order against the company this year prohibiting them for filing any more foreclosures from Feb. 27 through April 3, 2014; foreclosures began again April 4.

The company agreed to pay $275,000 to certain homeowners impacted by their practices, which amounted to $500 for 450 former homeowners, according to the Attorney General’s office.

Quality Loan Service also lost a 2010 lawsuit in Washington brought by the estate of a disabled elderly woman whose home was auctioned off by the company for about $150,000 less than its value, even though the homeowner had a signed offer for the property from another buyer for $235,000.

Quality Loan Services was also eventually found to have “falsely notarized legal documents” and ignored requests to postpone the auction. The case went on to become a landmark decision requiring mortgage trustees to be “even handed” in weighing banks’ needs vs homeowners needs.