Tiger Woods and the Masters: The Ultimate Odd Couple 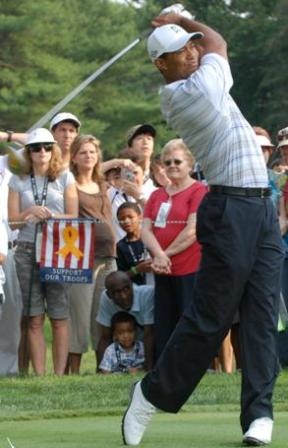 The Second Coming of Tiger Woods, just four days after Easter, will dominate the airways this weekend. Woods chose the tradition-laden golf course for his return, in part, because it provides him the best buffer to separate him from fans and journalists who want to know about his extramarital dalliances with the likes of former porn stars and his one-car accident with a tree and fire hydrant last November near his Orlando-area home.
The curiosity factor has been heightened by Woods' carefully-scripted reaction to his very public fall from grace: his refusal to meet with police after the accident, his staged press conference in which he read a statement but declined to take questions and the 5-minute "interviews" with two news outlets leading up to the Augusta National. In a poor tactical move, he did not hold a formal news conference until Monday, more than four months after the incident.
To orchestrate his PR, Woods hired Ari Fleischer, the former White House press secretary under George W. Bush. Of the many competent public relations firms around, both Black and White, Team Tiger selected one whose owner had to explain why Bush lied to American citizens about Iraq purportedly possessing weapons of mass destruction. I guess when you've been as self-destructive as Tiger Woods, with the skank-of-the-day disclosures, it's best to turn to a master of mass distortion.
Even more surprising than turning to a former Bush mouthpiece to repair his tarnished public image was the selection of Augusta for his return to golf. The first Masters tournament took place in Augusta in 1934. African-American golfers were not allowed to play there until 40 years later when Lee Elder broke the color barrier.
The country club did not have its first Black member until 1990. That happened just months after the all-White Shoal Creek Golf and Country Club in Birmingham, Ala. was warned by the Professional Golf Association (PGA) that it would not be allowed to continue hosting major tournaments if it continued its Whites-only policy. Hall Thompson, the Augusta founder, declared at the time, "This is our home, and we pick and choose who we want."
Civil rights groups threatened to picket the tournament and major corporations withdrew as sponsors. To end the controversy, the country club decided to "pick and choose" Louis Willie, a local Black insurance executive, to become an honorary member before graduating to full membership. It now admits African-Americans, Jews and women as members. Last September, Former Secretary of State Condoleezza Rice, a native of Birmingham, became a full member of Shoal Creek.
The Augusta National hasn't made as much progress. In fact, women are still prohibited from joining the country club.
Augusta's history of racial exclusion was broken by Lee Elder but shattered by Tiger Woods. En route to earning the fabled green jacket in 1997, Woods shot a record 18 under par, earning a 12-shot victory. In 2001, Woods won another green jacket with a two stroke, 16 under par victory.
In a not-so-subtle effort to "Tiger-proof" the golf course, the Augusta National Country Club lengthened nine holes, adding a total of 285 yards. The result? Tiger Woods won the Masters again in 2002, becoming the second-youngest player to win the tournament three times. He won a fourth Masters in 2005.
Professional golf for years was known as one of the most segregated professional sports. It was not until 1961 – long after most major sports were desegregated – that it removed the Whites-only clause from its membership requirements. That does not mean, however, that African-Americans have not been involved in the sport.
John Shippen, the son of a Black father and Native American mother, competed in the U.S. Open in 1896. George Grant, a Boston dentist, is credited with inventing the modern wooden tee in 1899. Calvin Pete won the 1979 Greater Milwaukee Open, the first of his 12 career PGA victories.
When Tiger Woods exploded on the professional golf scene in 1996, it was supposed to usher in a new era of African-Americans who wanted to be like Tiger. Inner city youth were encouraged to take up golf and the PGA pledged to initiate more activities to encourage Blacks to take up golf, a sport long associated with privileged White males.
In the 1960s and 1970s, there were at least 10 Black golfers on the PGA tour, including Calvin Pete, Charlie Sifford, Lee Elder and Pete Brown. Today, even after Tiger Woods' success on the golf course, he is the only African-American on the tour. The only other dark-skin PGA golfer is Vijay Singh, a Fijian.
When asked about the lack of Blacks on the tour, Woods told reporters: "Am I disappointed? Yeah. I thought there would be more of us out here."
If there were, there might be less of a burden on Tiger this week in Augusta.