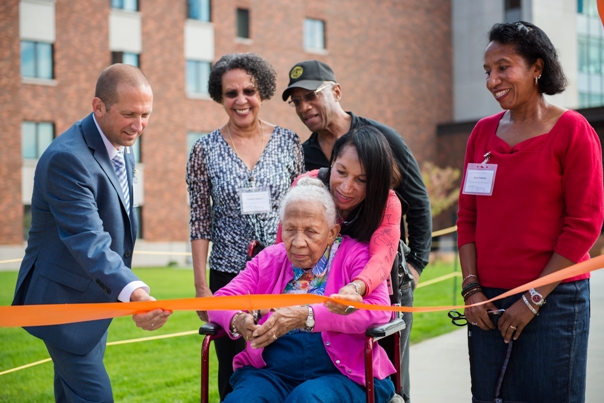 By Tim Hall co-chair of Oregon State University Board of Visitors for Community and Diversity
Published: 20 October 2014

Corvallis, OR – Oregon State University has dedicated a new residence hall to a man who overcame racism and adversity to become the university's first African American male graduate in 1948. The $27 million housing complex was named for William “Bill” Henry Tebeau, who was turned away from campus housing because of his color.

From the number of potential names, the OSU selection committee stated that the choice of the new dorm became clear after reading about Tebeau’s challenges.

“Mr. Teabeau’s unjust treatment is a painful legacy that OSU must own in our history,” said a committee member. “It is because of the fortitude, resiliency, compassion and courage he exemplified through his entire life.”

Bill Tebeau was born in 1925 and raised in Baker City (Baker), Oregon by Henry and Francis Tebeau. He graduated from Baker High School in 1943. When he arrived in the rural town of Corvallis, Tebeau faced many hardships with humility.

Denied a bed in a student dorm, Tebeau found housing at a fraternity house for international students. In exchange for shelter and daily meals, Tebeau tended the furnace and helped in the kitchen. His time at Oregon State College was spent dedicated to academics. He graduated with a degree in the difficult field of Chemical Engineering.

Following his passion after graduation, Tebeau returned to Baker to start a 36-year career with the State Highway Department – now the Oregon Department of Transportation (ODOT). He studied on his own for a license as a Civil Engineer and was promoted by ODOT. He and his family moved to Salem, where he was instrumental in highway construction and road improvement projects.

Tebeau was responsible for mapping many Oregon cities, counties and urban areas. He also served as an engineering instructor at Chemeketa Community College most of his life.

Among his many professional and civic honors, Tebeau was inducted into OSU’s “Engineering Hall of Fame” and received the College of Engineering’s “Oregon Stater Award” in 2010. He was also recognized by the Oregon Northwest Black Pioneers for his contributions to Oregon.

A well-known family man, Tebeau and his wife Genevieve had seven children. Their family grew to 13 grandchildren and eight great, great grandchildren. Tebeau died on July 5, 2013 in Salem. Genevieve Tebeau and daughters Deni Williams and Janine Roland attended the event.

At the ceremony where over 100 people gathered, OSU President Ed Ray, remembered Tebeau as a humble man of great accomplishments.

“Bill Tebeau is clearly an outstanding example of the exceptional impact our alumni make every day,” said President Ray. “He was a proud member of Beaver Nation throughout his life.”

Ray reminded the audience of Bill Tebeau’s motto: “Make it a great day,” with an emphasis on Make. Tebeau’s motto is posted in large letters in the entry way of the new building.

“I remember meeting Bill early in my career as many of my OSU classmates and I were studying to pass the professional engineering exam,” said Mather. “Bill dedicated his time to helping each of us prepare for the exam and challenged us to be better engineers and to continue learning throughout our careers.”

Tebeau Hall has housing for 280 students in suites and apartment-like rooms with many conveniences, including modern kitchen and laundry facilities and a student health clinic.

This is the second Residence Hall at OSU to be named in recognition of an African-American. In 2002, the university opened Halsell Hall in honor of Carrie Beatrice Halsell (Ward), the first Black female student to graduate from OSU in 1926. Born in Salem, Oregon, Halsell earned her degree in Commerce and served as a faculty member at South Carolina State College.

Tim Hall is a City of Portland spokesperson and Oregon State graduate who serves on the university's Board of Visitors for Community and Diversity.