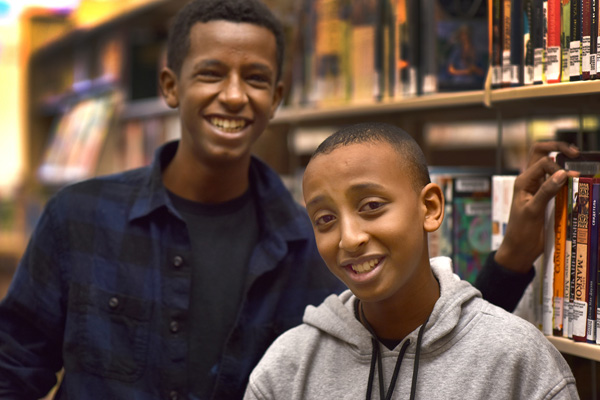 Hiab Ghebregherghis came to Multnomah County’s Rockwood library almost every week because Saturday afternoons were too quiet at home. He came because his father is a serious man who wants his son to work hard and go to college.

Amid the rows of books, he made new friends and volunteered to help the staff, a gig that he hoped would help him get scholarships to pay for college. His dream is to be a neurosurgeon.

Still, he never expected that between those same stacks he would reunite with a childhood friend who, like him, fled a state at risk of collapse more than 8,000 miles away.

Hiab and Filmon Elyas grew up studying at Mai Tesfa elementary in Asmara, the capital city of Eritrea in eastern Africa. It seemed like a good life, in which the boys fashioned spinning tops by winding shoelaces around the seed of a hard sweet shelled fruit. They sang the song “hoye hoye” when night fell and played games with burning sticks without fear of starting a fire because the ground was bare dirt.

Had they stayed in their home country, the boys would have been forced to serve the military of the authoritarian regime. Soldiers were conscripted for their entire adult lives, employed as forced labor when there was no war to fight.

Meanwhile the economy of Eritrea was rapidly deteriorating. Medicine, electricity, fuel and food were running low. The boys risked torture if they refused to serve in the military. They faced poverty if they stayed.

In September 2012 their families whisked them out of Eritrea. Hiab was 12 and Filmon was 11 when they said goodbye. They never thought they would see each other again.

The families waited for their number to be called to allow them to resettle in a new place - maybe Sweden, maybe Germany, maybe the United States. It was something akin to winning the lottery -- a chance to resettle for good in a free, developed country.

After a year of uncertainty, Hiab’s family finally got word: they were being resettled in Portland, where Hiab’s uncles had settled as a refugee.

It was a mild September when the family finally moved into a weathered apartment in the Rockwood neighborhood. Hiab enrolled in H.B. Lee Middle School. Eritrean classes had been challenging so Hiab found the curriculum relatively easy. And he was happy to discover the teachers didn’t punish children by forcing them to kneel for long periods or by slapping them across the thigh with a stick.

His English came easily and quickly and Hiab’s uncle knew the teen liked to read. He introduced Hiab to the Multnomah County Rockwood Library, a one-story building set back from the rush -- and easy to miss -- on Southeast Stark Street and 179th Avenue.

It’s a bright place on grey winter days when rain runs down the wide windows. Inside, it bustles. Children huddle around computers chatting in Spanish or Somali or with accented English.

Mothers sit with kids on their laps at tables behind rows of books written in Russian and Spanish.

The library became Hiab’s weekend hangout. He read through “The Olympians’’ series then the “Hunger Games’’ trilogy. He’s now reading “Wonder,’’ the story of a boy  with a facial deformity who decides to go to public school.

Over the visits, Hiab and his family got to know Reid Craig, a library assistant who had launched a peer tutoring program a few years before. Craig asked Hiab to join the group.

“The vast majority of volunteers are new immigrants themselves,” said Craig. “They’ve had to be sponges to survive. They’ve had to learn, learn, learn. And now they get to take some of what they’ve learned and teach it.”

Hiab became one of 50 teens who have volunteered about 500 hours in the past year, tutoring more than 250 students in 29 languages.

“The first time, I was a little shy,” Hiab said. But he became comfortable and now teaches people how to use the computers or helps them complete homework assignments. When he doesn’t have a student he focuses on his own homework or shelves books.

He was walking past the library’s computer bay one Saturday afternoon in November when he heard his name.

Hiab looked at the young man, who was thin and a foot taller than him.

When the teen said his name, Hiab recognized Filmon, his boyhood friend who had shot up and thinned out during the past two years since they’d seen one another. They shook hands (because hugging is for children, Hiab later explained). Craig snapped a picture.

Filmon had landed in Portland two months before and quickly became bored in the apartment his mother rented just blocks from Hiab in Rockwood. Somali teens who lived in the complex said they hung out at Rockwood’s neighborhood library of weekends. So Filmon went, too. He used the computers and appraised the library’s collection of manga; he loved the colorful drawings and action in the Japanese cartoons.

Since that day, Hiab and Filmon have met at the library to play video games, and to talk about home, the intervening years and what’s next for them. They’ll both begin classes at Reynolds High School next year and they say it will be nice to know another Eritrean among the 3,000 other students.

Filmon recalls how stunned he was when he first recognized his old friend, Hiab. “I didn’t believe my eyes,” he said. “I could be anywhere.”

“And at the same library!’’ Hiab said “Can you believe it?”

Check out the Computer and Homework Helper program.

HOW: Check the online schedule at: multcolib.org/events/computer-homework-helper