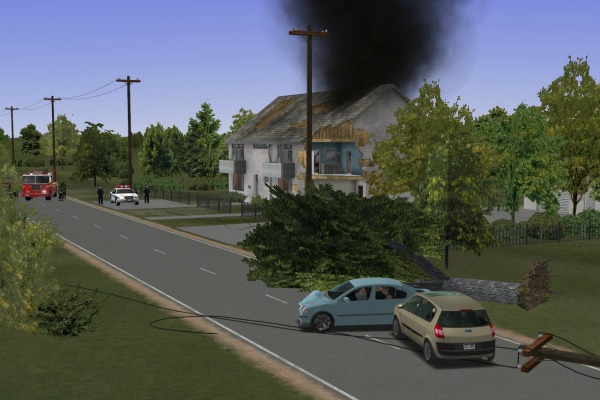 A wind storm has knocked over an old oak tree on a desolate country road. Power lines are entangled with branches, trapping a small car with passengers. A fire breaks out in a nearby house – what do you do?

This is the question being asked at the Homeland Security Simulator at Concordia University, a state-of-the-art facility that can create thousands of different training scenarios. This simulator serves as a teaching instrument for Homeland Security students at Concordia and is available for disaster training for other businesses and public agencies.

The simulator features a 43-foot by 10-foot semi-circular display that provides a fully immersive experience as if the incident commander was actually at the scene of an emergency.

This involvement is key in learning to make decisions, according to Jason Nairn, the director of the Homeland Security Simulation Lab.

"The simulator has a number of functions, but one of the things it does well is put leaders in the position to have to make critical thinking judgments and ethical decisions," Nairn said.

Attached to the large display are six video monitor stations which also interact within the simulation. These stations support other active participants like emergency medical personnel who treat injured people.

In a nearby room there is the Emergency Operations Center that also shows the simulation. This room offers training for executives like the chief of police, the fire chief, or the mayor -- people who wouldn’t be on the scene, but would still be responsible for decisions and resources.

There is even a broadcast studio on site for the instructors to create newscasts to deliver disaster information.

The system is designed to train all levels of emergency responders simultaneously and allow for different emergency teams such as police, fire and rescue and hazardous materials crews to work within the same scenario.

Concordia spent $1 million for simulator software and the building modifications. According to Nairn, the FBI and the NYPD also use the same simulator software, called the Advanced Disaster Management Simulator (ADMS), but only in discrete stand-alone units.

"There is no other set up like this in the country, with EOC (Emergency Operations Center), the emergent theater, the classrooms and everything together," Nairn said, adding that the ADMS software manufacturer, ETC Simulation, calls Concordia’s configuration the most advanced and largest.

“This is definitely unique in the country, and on the West Coast there is really nothing like it,” Nairn said.

In addition to the rural scene, there are downtown scenes, shopping malls, seaports, airports, industrial plants and college campus environments. The software is customizable so the instructors can add active elements to the situations such as a debris fire, a multi-vehicle accident; even terrorist attacks.

Nairn said the simulator is adept at training for acts of terrorism like the Charlie Hebdo shooting and the siege on the Lindt Café in Sydney, Australia. These malls, cafés, and office buildings are considered undefended “soft targets.”

“Soft target attacks are a concern for Homeland Security professionals and the simulator has many, many soft target scenarios that can be operated in a variety of environments,” Nairn said. 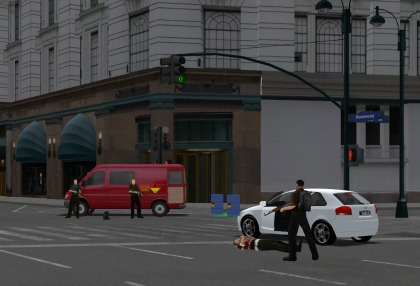 An active shooter scenario from the Homeland Security Simulator

A physics engine drives the elements within the scenario; an unattended fire will grow and spread, smoke will change direction according to the wind and injured people will become more critical without medical attention.

The simulator will injure up to 75 people at a time and each of those people will have a unique set of injuries determined by the computer algorithm. In a simulation of the Boston Marathon bombing, some runners will have less critical wounds while others need immediate attention. Instructors can manually change the intensity of these variables as well.

Nairn said the students like the simulator, but it also stresses them out. “All the things you learn in theory are a lot different in practice.”

The scenarios create a safe to fail environment where students can learn from their mistakes without risking actual lives or costing public money.

“A lot of people gain experience in work by actually being involved in incidents that … resulted in a failure,” Nairn said. “In the public safety industry, failure is not something that we can afford to do when lives are on the line.”

Construction was recently finished on the Homeland Security Simulator and the simulation lab is now reaching out to the community to provide training opportunities. In the aftermath of the Reynolds High School shooting, both Multnomah Education Service District and Portland Public Schools have visited the lab.

The unique nature of the set up has global implications as well. According to Nairn, the lab is working with the software manufacturer to become a regional center to train people in other countries to run the software for themselves back home.

Whether it is for the classroom, the local businesses, or global training, the end goal is to improve safety.

“We would hope that businesses and public agencies would have improved resiliency because they are able to train in a safe-fail environment,” Nairn said. “If you can fail safely, you can learn.”

Learn more about the simulator by visiting www.homelandsecuritysimulator.com