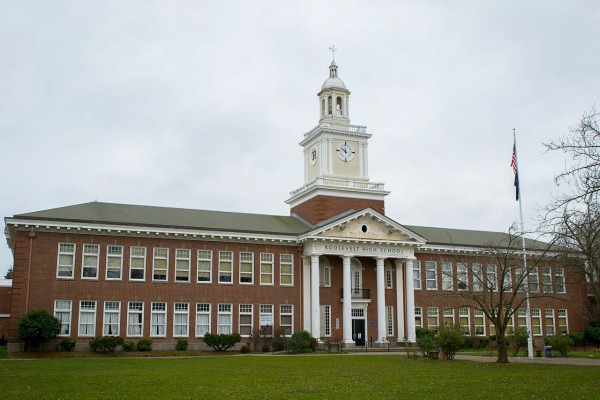 Two-and-a-half years later, the Roosevelt modernization project is embroiled in a conflict between the Portland Public School District and a Roosevelt community group over inequities in the new school design.

Portland officials are adamant that they conducted more than 50 public meetings and that the dissenters’ criticisms are unfair and not legitimate.

The Roosevelt boosters are equally insistent that, while many meetings were held, they were treated as outsiders despite their expertise in the field and in the community – and in the end they had no ability to influence the final design without filing a complaint with the federal government.

At the end of the day, the critics charge, the science education offered by a STEM program was put on the backburner for other, less academic priorities, including the gym, the theater and a courtyard.

STEM is an acronym for science, technology, engineering and mathematics, the intertwined branches of contemporary science education.

The group also includes the St. Johns community leader Mike Verbout, who founded the Roosevelt Alumni association and has 33 years of experience in PPS as a teacher, administrator and former principal at James John Elementary School.

They have filed a civil-rights complaint with the Office of Civil Rights at the U.S. Department of Education. At the heart of the complaint is an alleged disparate design of STEM career technical education between Franklin and Roosevelt.

The design process at Franklin led to an expansive 9,000 square foot workshop that will integrate higher tech equipment like 3-D printers and computer labs with older wood craft and metal shop technology.

In contrast, Roosevelt’s workshop was cleaved into two separate facilities of 3,400 and 2,000 square feet. Neither facility alone is large enough to effectively teach STEM, according to Cohen, who supplemented the complaint with a report of her own.

Her report contends that the two schools were treated differently from the very beginning from the selection of the architecture firms, to the design constraints, to the public engagement engagement process -- which will lead to a substandard STEM education for the majority low-income and students of color at Roosevelt.

PPS Chief of Communications & Public Affairs Jon Isaacs denies any preferential treatment between the two schools and insists that Roosevelt will have a first-rate remodel.

“The Roosevelt community is going to get an $81 million, state-of-the-art, 21st century high school that is going to transform education for the kids in North Portland,” Isaacs said.

A lack of engagement or a failure to agree?

Despite promises to include local families as well as businesses and nonprofit organizations in planning, Verbout says, few members of the community showed up, leaving the meetings peopled mainly by PPS staff.

By the second design meeting, Roosevelt was still discussing its basic plan, while Franklin’s architects already had a list of specific design issues to address.

Phillips said information was not shared between Roosevelt and Franklin; PPS intended the projects to be independent processes.

“Whenever we brought questions up at RHS (Roosevelt High School) DAG (design advisory group) meetings about what FHS (Franklin High School) was getting in terms of space, equipment, curriculum and adjacency, we were told by our project manager that FHS was a different school, with different priorities and constraints, different preferences,” Phillips said.

Phillips got into contact with Peter Mahr, a retired teacher at Franklin who had helped design their STEM space, expanding it from 6,000 to 9,000 square feet. Mahr received a CAD [computer-aided drafting] drawing which enabled him to design the layout of the new shop.

“PPS was doing exactly what we wanted at FHS while turning a deaf ear to our attempts,” Phillips said.

In other words, the critics say, the input was accepted at Franklin but not at Roosevelt.

The STEM advocacy group asked to have a working meeting with the Roosevelt project architects to alter the designs in the same way Mahr collaborated with Franklin. PPS responded by arranging a meeting where the architects gave an in-depth presentation, but made no design changes.

Isaacs denies there were any issues engaging the community, calling PPS’ outreach “extensive.” He said Cohen’s group was not considered to be representative of the larger community input and felt it would be unfair to give them special privileges to change the design.

"We will certainly never do business in a way where three individuals in a whole community get to have a special meeting with our designers and make special arrangements with them. That is not the way any public agency should do business," Isaacs said. “The new Roosevelt design honors the input of the entire community.”

To keep updated on the Roosevelt modernization visit the PPS bond site.