Moms Call For ‘Ceasefire’ and Peace 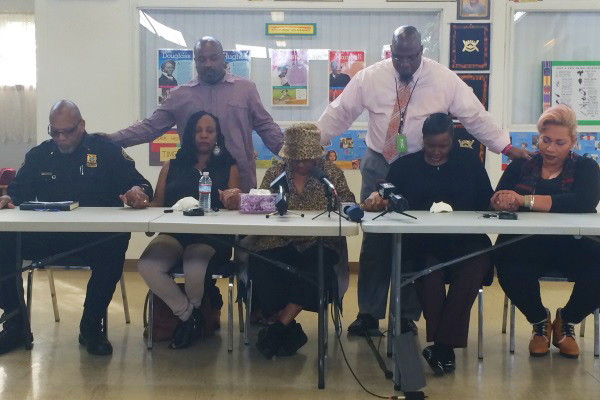 Four Portland mothers, all whose sons had died in gun violence, gathered at Bethel A.M.E. church in Northeast Portland, Friday, March 6 to call for an end to violence in the city. Photo by Donovan M. Smith

Emotions were high at a press conference called by the mother of the late Quintrell Holiman, who took his own life during a standoff with Portland Police this month. The message was a simple one, a message of peace.

Gizelle Holiman, Quintrell’s mom called the press conference on Friday held at Bethel A.M.E church  also to clarify a rumor she says was spreading on social media—that her son was in fact killed by officers on the scene.

“My son made the decision to take his own life.” Holiman stated. The Oregon State Medical Examiner ruled 26-year-old Holiman’s death a suicide a day after he died. Police records said Holiman had fired at officers before fatally turning the gun on himself.

As the rumor got steam, calls for vengeance against the police followed.

“I’m begging you please leave the police alone,” the elder Holliman pleaded. “If everybody loves my son like they say, put the guns down.”

Holiman’s son was a documented member of the Hoover Criminals gang in Portland and had recently been released from prison. She theorizes the fear of returning to prison and recent familial stress led Quintrell to take his own life.

“He’d decided ‘I’m not going back to jail,’ he’d been having problems with his daughters’ mother, and he couldn’t take it anymore,” she says.

The call for peace was unfortunately followed by a string of violence. Around midnight March 9, a fight broke out along the 2700 block of Southeast 125th Avenue that erupted in gunfire. One bullet struck 23-year-old Carlos Antonio Barerra in the stomach—he’s expected to survive.

That same day, Tyrone Allen, 23, was arrested by police. He’s accused of another shooting near Northeast 102nd Avenue and Prescott Street the preceding day. The gunfire yielded no victims but did damage a car in the area.

Perhaps most tragic in the string of the death of Beketel Elbelau Sleeper, affectionally called ‘EJ’ by associates. Sleeper’s friend, 21-year-old Isaiah Horatio Hayes, accidentally fired a round while the two sat in a car—killing him.

A memorial fund for Sleeper’s funeral has been launched by his family and can be found here.

Last year, Portland native James Crittenden Sr., a former gang-member, put out a similar call for peace in a video that showed him embracing a former rival.

That video released in August, 2014 received thousands of shares in a matter of days.

"It takes a real man or a real woman to do this," Crittenden says. "If you can approach someone and let them know, 'I'm sorry about what I did.' Or if they did something, to say:  'I want to let go of what you did. Let's not let this happen again. Let's just live life and be happy.'"

Mayor Charlie Hales issued a statement on Holiman’s death also calling for an end to violence in the city.

“The violence has to stop. It will take a combination of hard work, faith and bravery to stop this destructive cycle. Let us look to the Holiman Family as inspirations for this work.”

Holiman leaves behind two, two-year-old children, a son and daughter.

The Office of Youth Violence Prevention offers resources on reducing and eradicating violence in the community. Visit their website at: http://www.portlandonline.com/safeyouth/