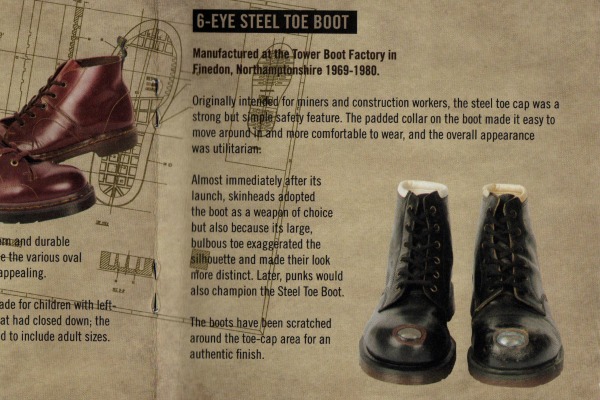 Portland mother Licia Seaman was horrified when she discovered a pair of Dr. Martens boots that uses skinhead ideology as a selling point. Seaman this week wrote a letter to the company’s headquarters in Portland urging them to cease production and marketing of the boot.

“Violence shouldn't be fashionable,” she said.

The Skanner News is awaiting comment from the company.

Seaman’s son first came upon the boot while working in the Dr. Martens warehouse. The “tower” model is a 6-eye steel-toe boot. It is part of a new “Worn By You” collection reissued from past designs and then deliberately scuffed up for a vintage look.

A small brochure accompanies the product, describing it as originally a miner’s work shoe. It says, “Almost immediately after its launch, skinheads adopted the boot as their weapon of choice.”

The skinhead marketing extends beyond the tower boot. The entire Dr. Martens Autumn Winter Reinvented Collection of 2014 is inspired by the early skinhead movement of 1968-69.

The early skinheads in Britain were a working-class pride movement that set itself apart from the long-haired hippies of the time. It wasn’t until later that skinheads became nearly synonymous with white power and hate crimes.

For Seaman, the years of skinhead violence can’t be ignored in favor of an early expression. She said the history includes nearly 40 years of violent racial attacks on strangers, such as the 1988 beating death of Mulugeta Seraw in Southeast Portland.

Seaman likens skinheads to the swastika, which was a sacred symbol that meant “good fortune” in Sanskrit. After being associated with the Nazi movement in Germany, the symbol has been stigmatized and has effectively lost its original meaning.

“Are they so attached to that particular model that they don't wish to recognize the 40 years after it?” Seaman asked. “I don't think it is salvageable.”

To Seaman, the association between the early, peaceful skinheads is disingenuous as well. Some of the other skinhead-associated boots were normal looking footwear from the late 60s, but not the “weapon of choice” tower boot.

The scuffed-up look of the boot for sale now shows the steel toe cap, as if the leather on top has been worn away after repeated kickings.

“If you bring it back and say it's the ‘weapon of choice’ then you are actually encouraging illegal behavior,” Seaman said. “I don't think we should be aiding people to express themselves violently.”

My son was employed in the Doc Martens warehouse, Portland, Oregon USA on March 6, 2015, restocking shoe inventory. It was nearing the end of the day before a weekend. He likes and buys a lot of current fashion shoes.  He saw an unusual design on a retro shoe model-- the 6-eye Steel Toe Boot-- but his initial interest quickly turned to revulsion. He and his co-workers worked at the table, as a supervising employee read aloud the print insert inside the shoebox.  The boot was described as, “Reborn from the early years of Dr. Martens” in the “Worn By You” collection. As they listened, the staff member continued on reading to them from the fashion brochure inside the shoebox.

“Originally intended for miners and construction workers, the steel toe cap was a strong but simple safety feature.” But what follows in the brochure is obscene: it is inflammatory. The brochure goes on to note, “Almost immediately after its launch, the skinheads adopted the boot as a weapon of choice.” My son was horrified to note the bulls-eye that is scratched onto the exposed steel on the toe of the boot.  As an African-American, my son's disgust is understandable. However any thinking person should be offended by this design and marketing approach.

I'm writing you now to ask you to cease making and marketing this boot design. Also, delete any reference to skinheads in your marketing and shoebox brochure for the 10-eye 1490 Boot.

Over four decades of skinheads' violent, racist, criminal behavior is a festering wound on our world as it struggles to affirm the dignity and humanity of everyone. I can understand your desire to advertise your goods to an increasingly diverse, cosmopolitan world of youth; however, you should not want to be condoning and abetting ugly racial violence, illegal and offensive as it is. And your shoe insert does just that.