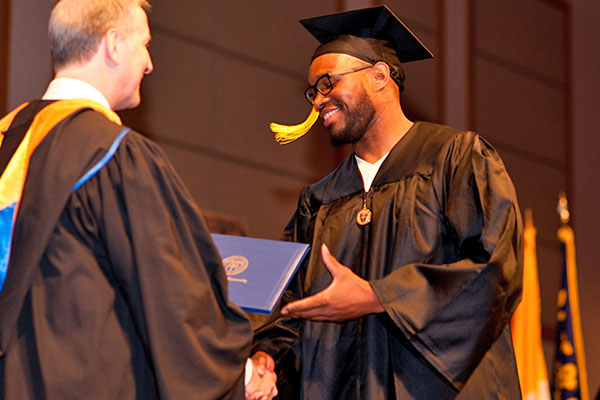 From his time in prison to his life outside the bars struggling to find work and housing, to his life as a student studying psychology and putting all the pieces together, Brandon Hoggans has lived many lives.

Hoggans recently completed his bachelor’s degree from Marylhurst University, and spoke with The Skanner News about his past and his plans to help those who have experienced incarceration.

Here are excerpts of the interview, edited for space and clarity.

The Skanner News: First off, Congratulations on graduating.

Brandon Hoggans: Thank you very much.

TSN: What is it like to transition back to society after prison?

BH: I would say the toughest aspect of successfully reintegrating back into society is the barriers that are in place for people who are convicted felons.

I experienced barriers in employment, but primarily it was in housing where the reality set in. That made it very, very difficult. Nobody would want to rent to me even though I had money. I met all the criteria, but once they found out I had a felony, they automatically disqualified me.

Employment was tough as well. I would get interviews for jobs because of my skill levels. I was overqualified for most jobs I had applied for and I would get them. At the end of the interview, I had to bring the felony issue up, and then everything changed -- they said they wouldn't be able to hire me.

TSN: How did you work around these obstacles?

BH: I utilized the resources that I had with my family and more importantly my self-determination that somebody in this position has to have.  I can imagine that the discouragement of having so many barriers in place can be the reason why people choose to get back into a criminal lifestyle. Because, in their best efforts, they aren't seeing any progress and they still have to provide for themselves and their families.

But, for me, it was my family and that self-determination to be successful.

TSN: What drew you to getting your bachelors in psychology?

BH: With these barriers, I knew that I would need some kind of credentials behind my name to open my own doors or to crack some of the doors that are closed.

I chose psychology because prison, 75 percent of it is mental -- dealing with the culture in that environment and the misguided concepts of authority and race relations. It takes a deep level of thought and understanding to survive that environment without coming out with debilitating psychological effects.

I spent from 18 to 26, my developmental years, incarcerated. I got some of my psychological concepts in that environment. Even though I grew up in there I understood that I made a mistake that got me in there, I no longer wanted to make those mistakes.

I studied psychology because I just naturally had a knack for perceiving my environment and perceiving people and understanding the thought patterns and ideas. More importantly, I had to do that as a matter of survival.

Over time, it allowed me to create some ideas for how I can help people who have experienced the same things and are coming out of prison and need to understand what kind of psychological issues they may have acquired while incarcerated.

TSN: It sounds like you gave yourself a second chance at that developmental time through your education.

BH: In my education, I was my own case study. I used my education to understand some of the things that I did as child and young adult. I know my experience is similar to many African-American boys growing up in deprived areas without a father, living in a single parent household. Those circumstances all have the potential to create the same outcomes.

TSN: How would you like to take these lessons and apply them?

BH: The biggest plan would be looking into attaining my PhD in Clinical Psychology; I have also applied to get my MSW at the University of Washington. I would like to be a psychological evaluator for ex-cons or convicted felons that are incarcerated and are trying to get back into society.

Given my understanding of the operations of prison and having been there and also the academic applications, I think I have a more practical understanding of where a person is at in that environment. If they were to be given a second chance, I know their likelihood of being successful if they were allowed to opportunity to reintegrate into society.

Eventually, I would like to have my own psychology practice, therapy practice and work with inmates who have re entered back into society and give them specific counseling to address some of the trauma that they have experienced.  I want to show them how to self-actualize and use those misguided skills that led them into prison and show them that they do translate into society.

I can be that bridge and show them how that they don't have to conform as much as they believe they do. Some people don't necessarily have the capacity to work a 9 to 5 job but they have the skill set and aspirations to work for themselves. I know that I could show them how to do that, show them how to live for the first time instead of being reactive to their surroundings.