‘Enough is Enough’ Calls For Alternatives to Gang Violence 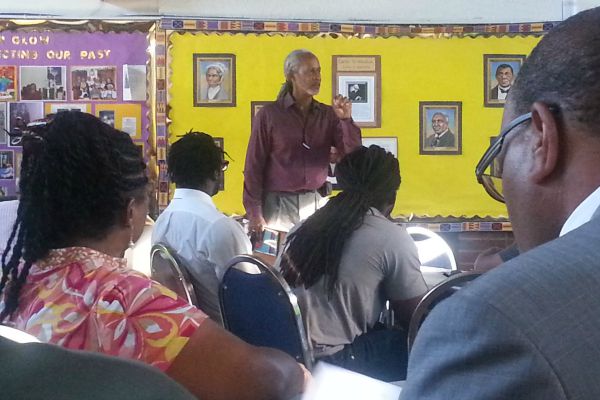 It was the kind of day that would send many people home to hide from the heat -- but to this community, it was a matter of life or death.

On Thursday, organizers, family members and former gang members gathered to talk about how to combat youth violence and mourn the loss of young Black men. The new initiative, Enough is Enough, aims to reclaim peace in the community by giving young men hope, opportunity and support.

Pastor Willie Hurst of New Zion Ministries opened the meeting with a prayer for the lives of young Black men. He asked for protection over them. He asked that there would be no more deaths during the summer break.

Family members stood in support of their slain young men. Relatives represented for Andreas Jones Dixon, who was shot and killed June 9, 2013, outside the Rockwood Station Apartments in Gresham. Family members spoke for Quintrell Holiman, who died February 25, 2015 after he shot at a police officer and then turned the gun on himself.

Parents, grandparents, and great-grandparents also stood to represent Anthony Quincey Jackson, a 19-year old who had been killed outside the Shalamar Apartment complex in East Portland. His death occurred only two weeks before the meeting and the family could barely speak of him without choking on their tears.

Former Urban League of Portland CEO Michael Alexander told the crowd that they needed to step up and encourage these wandering sons before more of them were lost to violence.

Former gang member Arthur Davis addressed the audience, sharing his life story and giving insights about leaving gangs behind. Soft-spoken and nervous, he told the crowd his father was killed by gang violence when he was only two years old. As he was growing up, he wanted nothing but revenge for himself and his siblings.

It was only after being incarcerated and becoming a father of three that he decided to turn his life around, even if that meant cutting ties with most of his friends. When asked what he needed from the community, he said, “Just tell me how proud you are.”

Speakers at Enough is Enough both defined the problems facing young Black men and proposed solutions for this crisis. Organizers hosted a series of speakers that highlighted grassroots work being done.

Roy Jay of Project Clean Slate and Project Second Chance spoke about the Black economy and how helping one person in the community raises the health of the entire community. He told the crowd one dollar in the Jewish community will stay in that community for 20 days.

Jay hoped for that kind of recirculation of wealth in the Black community, but said the people in the community are often depressed by incarceration fees that ruin creditworthiness. He announced a new legislative effort to wipe clean these fees.

Keith Edward, a retired electrician and executive board member of the Oregon AFL-CIO, told the crowd about the Constructing Hope pre-apprenticeship program. He said as an electrician, he’d earned a family wage and had health care and a pension, and had been able to retire with dignity. Constructing Hope, a nine-week trade apprenticeship, would enable young people access to similar security, he said.

Though efforts like Black Male Achievement have made headway with youth, Enough is Enough issued a call out the community to give back their time and effort.

Jerome Brooks, a former employee of the Oregon Youth Authority, said giving back to the community could mean something as simple as visiting young men who have been incarcerated in the OYA. He said these 12-to-24-year-old young men can go years without visits.

He said people consider them throwaway children, and asked the gathering, “Who's going to fight for those children?”

When they get out, he said, they need to be enrolled in either work or school within 30 days or they will be likely to start the cycle of violence once again. Brooks said this outreach can’t be done from afar, or through policy or policing. Instead, it has to be done by the community, for the community.

When longtime gang outreach worker Robert Richardson spoke, he reaffirmed this sense of connection. “Violence is just like rain. When it falls, it affects us all,” he said.