Activists Take to the Street After Arraignment 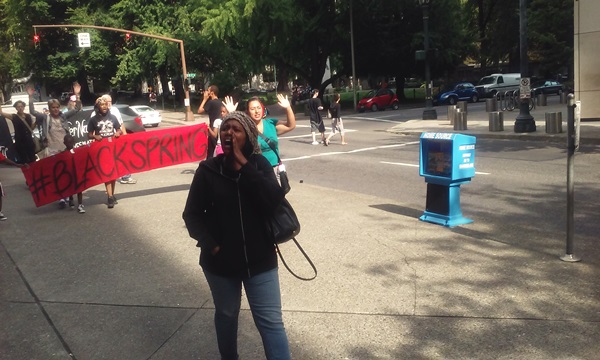 Of The Skanner News

More than 40 people took to the streets of downtown Portland Tuesday morning following the arraignment of activists Teressa Raiford and Diane Chavez, both of whom were arrested Sunday afternoon during a protest on the anniversary of the death of Missouri teenager Mike Brown.

According to police reports, they “elected to be arrested opposed to removing themselves from the street.”Raiford told media and supporters on the courthouse steps that she and Chavez would have a second court date Aug. 27. Most of the activists and media who showed up for the arraignment waited in the hall outside the courtroom for the news rather than hearing it in person. According to Chavez, the judge presiding over the arraignment told them there were already too many people in the court room before the activists’ arraignment began.

After posing for group photos with supporters, Raiford and fellow activist Loren Ware, also known as Glenn Waco, led a march from the Justice Center to City Hall. There they lay in the street in front of City Hall for four and a half minutes – one minute for every hour Brown’s body lay in the streets of Ferguson, Mo., unattended. They also chanted the names of Black citizens who had been killed by police or died in police custody.

Dana Haynes, the spokesperson for Mayor Charlie Hales’ office, observed the protest from the sidewalk in front of City Hall. Raiford confronted him directly, saying, “We’re not here to amuse you. We’re not here to entertain you. We are the people, you f--- with us.”

“If I weren’t with the mayor’s office, I would be with you. This is an important issue,” Haynes told protesters, in response to a question from a protester about why Portland city officials would not join the demonstration, as officials had in Seattle. He was referring to Seattle City Council member Kshama Sawant, who has vocally supported the Black Lives Matter movement and was arrested earlier this year during a protest to raise the minimum wage.

He said he was kept out of the courtroom not just because of the size of the crowd but because he had been arrested previously after aiding a victim following a shooting earlier this year. “An arrest is not a conviction. I am innocent until proven guilty.”

Two patrol cars showed up during the early part of the protest, then set up traffic cones to block off the street and left. Before leaving, an officer told demonstrators, “You are being recorded.” One responded, “You’re being recorded, too.”

Asked to clarify his comments to demonstrators, Haynes told The Skanner, “My job is to listen. The message of Black Lives Matter is an important message.”

Haynes said Mayor Charlie Hales was out of town but he would relay information back to him. The city’s priorities in the event of a protest, he added, were public safety, respecting demonstrators’ first amendment rights and also honoring the rule of law. “At some point we’ll have to reopen the street.”

Raiford and Chavez were arrested as part of a planned demonstration in memory of Mike Brown’s death. Following their arrest, demonstrators moved to the Moda Center downtown where Democratic presidential candidate Sen. Bernie Sanders was campaigning in front of a reported 28,000 people. Black Lives Matter demonstrators had gone onstage during Sanders’ Seattle protest, drawing boos from the crowd while they spoke and asked for silence for Brown.

A speaker introducing  Sanders mentioned Raiford’s arrest. The campaign also thanked Raiford on his official Facebook the following day, writing, “A special thanks to Teressa Raiford Mazique of Portland who reached out to the campaign in solidarity and friendship. Her help in Portland is greatly appreciated. As she said, ‘We stand together.’ And she's right. All of us fighting for justice must stand together if we are going to win. We are all relieved that she is safe.”

Though police said the arrests did not involve the use of force, organizers from the local Black Live Matter group who helped organize Sunday’s demonstration say Raiford was targeted. They worried for her safety in the wake of the mysterious death of Texas woman Sandra Bland, who was detained for failing to use her turn-signal and later died in police custody last month.

Though Bland’s death has been ruled a suicide by hanging by Texas police, her family and friends have questioned that narrative.

Asked for comment about the protest or her arrest, Raiford told The Skanner, “People need to be paying attention to what’s happening in Ferguson. Things have gotten worse since Aug. 9, 2014.”