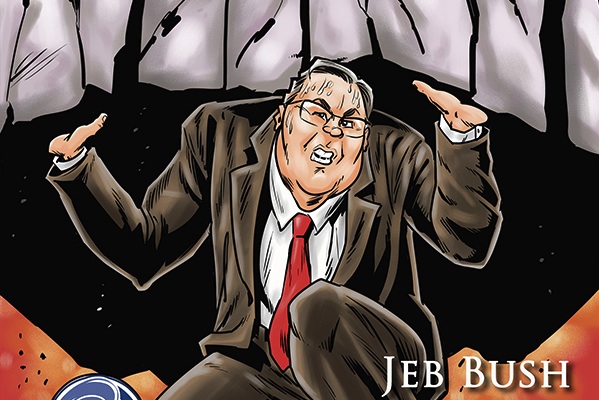 A Portland comics publisher has released the latest in a series of political biography comic books featuring many of the contenders in the Presidential Election.

Also on the schedule for release this fall is the retrospective 96-page "Female Force: Hillary Clinton: the Graphic Novel," and the 48-page one shot "Political Power: Rand Paul and Ron Paul: Don't Tread on Me".

"For the Bush family, legacy is a powerful word, hinting of destiny made manifest and the promises of generations kept," the publisher says.

"Prescott Bush, a Senator from Connecticut, felt its power, as did his son, George Herbert Walker Bush, the 41st President of the United States, and grandson, George W. Bush, the nation's 43rd President. But will the weight of legacy be too much for W.'s brother, John Ellis "Jeb" Bush? Can he forge his own legacy?"

The comic book was written by longtime StormFront Publish contributor and Missouri State University professor Michael Frizell. It features of the art of Joe Paradise.

"Though trying to distance himself from his brother and his father, it's clear that Jeb has been shaped by his past, Frizell said. "He has some hurdles to overcome, to be sure, but I found him interesting and thoughtful. Exploring the dynamics regarding the Bush legacy afforded me the opportunity to research different eras and varied viewpoints." 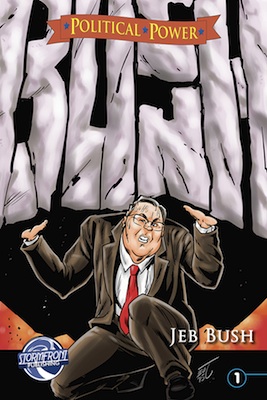 The cover of the biography features Jeb literally trying to hold up the family name without succumbing to its weight.

Artist Joe Paradise says: "The thing that kept coming back to me was the pressure of taking the spotlight in the dominant dynasty in American politics. So, we're not just talking family pressure - we're talking about something beyond comprehension for most everyday people."

Since 2008, The "Political Power" and "Female Force" series have spotlighted more than 60 politicians, leaders, and influential cultural icons. Darren Davis, president of StormFront Publishing says the titles have strived to maintain a certain "journalistic feel."

"The goal here is not to proselytize for one party, one candidate, or one point of view. If we are to be successful, we need to balance our stories and provide an even-handed look at our leaders and the process by which they govern...warts and all," Davis said.

"These books are a good example of how a comic book can be entertaining and educational."