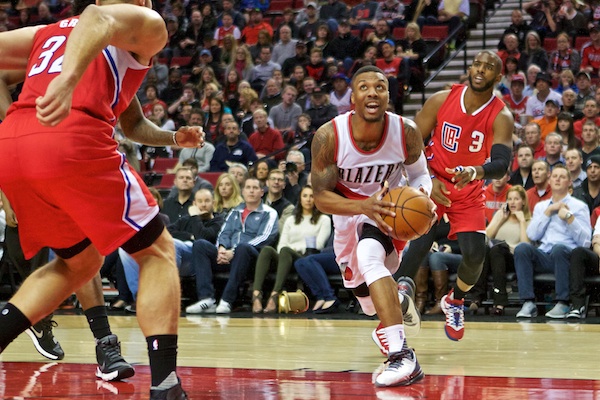 PORTLAND, Ore. (AP) — After the second of back-to-back 3-pointers found the bottom of the net, Damian Lillard pointed to his wrist signaling, "It's Lillard time."
The crowd roared.

When he hit the third 3, Lillard knew the Portland Trail Blazers' losing streak was ending.

"After I hit the third one I was like, whatever happens, I'm going to make sure we win this game," Lillard said.

Lillard finished with 27 points and the Trail Blazers snapped a seven-game skid with a 102-91 victory over the Los Angeles Clippers on Friday night.

Lillard's 3-pointer with 3 ½ minutes left gave Portland a 90-85 lead. Blake Griffin answered with a basket on the other end, but Lillard nailed another 3.

Lillard hit another 3-pointer with 1:46 remaining to put Portland up 100-87 and the Clippers couldn't catch up.

Paul Pierce did not play on the second night of a back-to-back. The Clippers blew a 23-point lead in a 124-117 home loss to the defending NBA champion Golden State Warriors the night before.

Clippers coach Doc Rivers said he planned to play Paul sparingly, because the point guard continues to work his way back from a groin injury. Paul ended up playing more than 28 minutes and finished with 11 points and eight assists.

Paul had averaged 29.3 points in his past six games against the Blazers.
JJ Redick returned for Los Angeles after missing the last three games with back spasms. He played 26 minutes and had seven points on 3-of-12 shooting.

Griffin left the floor in the first half but returned to the game with 8:04 remaining in the second quarter wearing a sleeve on his left leg.
The Clippers tied it at 70 with 1:39 left in the third quarter and Portland's was 75-73 heading into the final quarter.

Coming out of a Los Angeles timeout, Plumlee split a pair of free throws to put the Blazers on top 87-85. Lillard's back-to-back 3-pointers extended their lead to 93-87.
"He's been very determined," Portland coach Terry Stotts said. "The back-to-back 3s would probably be the signature plays of the game. . I thought he showed a lot of leadership."

TIP-INSBlazers: Meyers Leonard did not play because of a dislocated shoulder. He's missed four games. ... Ed Davis recorded a double-double with 17 points and 15 rebounds.
Clippers: The Clippers fell into third place in the Pacific Division, a game behind Phoenix.

TRIPLE DOUBLE-DOUBLES
In addition to Davis and Plumlee, Al-Farouq Aminu had 10 points and 12 rebounds. The last time the Blazers had three players with double-doubles also came against the Clippers (LaMarcus Aldridge, Chris Kaman and Meyers Leonard) last season.

CRAWFORD'S ASSESSMENT
Jamal Crawford on the fourth-quarter woes: "It's like the moment of truth in every game. It's going to go one way or another. For us tonight in the moment of truth they stepped up and made plays, and we could just not get over that little hump. We were right there, but they wanted it more."

UP NEXT
Clippers: Host Toronto on Sunday.
Trail Blazers: Visit the Los Angeles Lakers on Saturday.