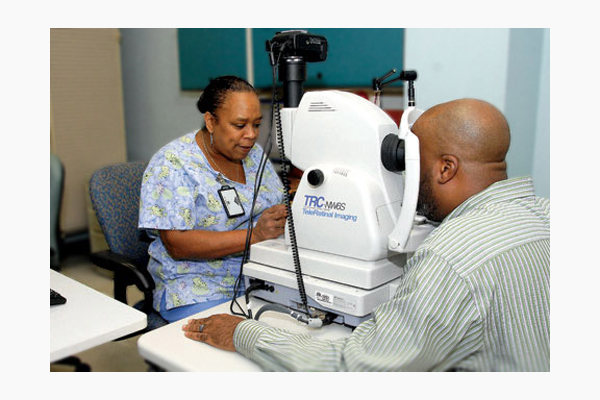 An estimated three million people in the United States suffer from Glaucoma, the leading cause of irreversible blindness. Of that three million, only half know they even have the progressive disease.

January is National Glaucoma Awareness Month. The campaign brings attention to the sight-stealing disease that often goes unnoticed until there has been permanent vision loss.

"(African Americans) tend to lose vision at quicker rates at younger ages than other people do," Parikh said.

It is not clear why Black people are at higher risk. Parikh said right now there are studies looking into the optic nerves of people with African ancestry to see if these nerves are different than those in White, Asian or Hispanic peoples.

Glaucoma is a condition where the optic nerve is damaged due to fluid pressure that builds up in the eye. Under normal circumstances, the eye continuously produces a fluid that circulates and flows out of the front part of the eye. In Glaucoma, the fluid leaves the eye at a slower rate which damages the nerve.

Parikh said this nerve damage is progressive and irreversible -- once vision has been lost it is gone.

“Whatever vision loss from nerve damage, we can't recover any of it. We can't do any surgery to fix the nerve, we can't do surgery to bring vision back,” she said. There has been experimental research to regenerate the optic nerve, but viable treatments are many years away.

Glaucoma treatments aim to prevent further damage. Practices include eye drops, oral medications and surgeries to open eye drainage. Parikh likened Glaucoma to other chronic diseases such as Diabetes where treatments are focused on management rather than curing.

The most important treatment is early detection of the disease. This is difficult to do, as early warning signs are often subtle and easy to miss.

An early symptom of Glaucoma is trouble seeing in the dark. Another early indicator is trouble seeing areas to the side of one’s vision. These do not present as blind spots, Parikh said, but they may look slightly fuzzy.

Parikh urges against trying to visually self diagnose Glaucoma. She said most people will not be able to pick up the optical cues of the disease in the early stages.

“It is not until the nerve becomes really damaged that people have problems seeing from the glaucoma, by that point there has already been a significant amount of damage,” Parikh said.

The best early detection is through an eye screening with an ophthalmologist. Using an opthalmoscope, the doctor can look directly through a dilated pupil to observe the optic nerve. This test is the best way to diagnose and monitor Glaucoma. Eye doctors can also check eye pressure levels and perform visual field tests.

The American Academy of Opthamology recommends screening exams for everyone over the age of 40. The academy considers African heritage to be as risk factor. Health conditions such as diabetes, migraines, high blood pressure or poor blood circulation also increase the likelihood of developing Glaucoma.

Glaucoma appears in families. If people have immediate family members with Glaucoma, they are four to nine times as likely to develop the disease. This risk is especially high if someone has a sibling with Glaucoma.

Parikh said there are a lot of misconceptions about Glaucoma. People often expect to feel pain and pressure in the eye, but most of the time these physical indicators are absent.

Another misconception is the role pressure plays in the syndrome. While Glaucoma is associated with high pressure in the eye, but this pressure does not diagnose the disease. One could have Glaucoma without having high eye pressure.

Parikh said the best defense against vision loss comes from catching Glaucoma early, before the damage has been done. The most important thing is knowing one’s risk and visiting an eye doctor to get checked out.

“You can certainly prevent people from losing their vision if you can control and manage the glaucoma properly,” Parikh said.