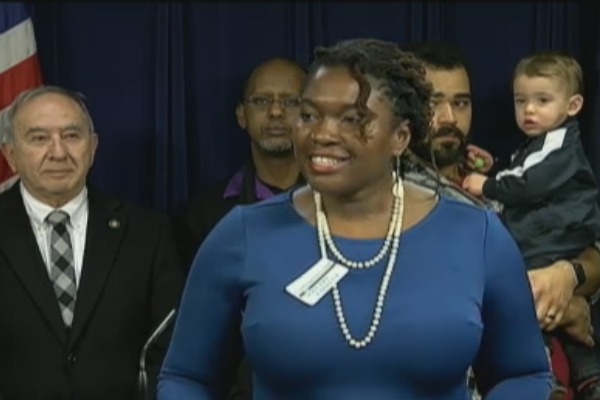 A coalition of community-based organizations converged on the Oregon state capitol earlier this month to release a report on racial equity legislation.

The report, Facing Race, highlights an impressive year of racial equity progress from the state legislature. The analysis identified 20 pieces of legislation that would have a significant positive impact on communities of color; 17 of those bills were signed into law.

“Our communities had an unprecedented level of presence and engagement in the 2015 session,” Miller said.

The report was issued by the Racial Equity Report Working Group, a coalition of 32 community based organizations. The group includes the Urban League of Portland, the Coalition of Communities of Color, the Partnership for Safety and Justice, the Asian Pacific American Network of Oregon and the Center for Intercultural Organizing among others.

Notable civil rights and criminal justice bills include the Motor Voter bill which registers voters through the Department of Motor Vehicles, the law to end police profiling and the bill to protect the rights of bystanders to record law enforcement.

Economic justice laws include the new paid sick days requirement, a bill to protect against wage theft and the “Ban the Box” legislation which bars employers from asking about criminal histories on job applications.

Nkenge Harmon Johnson, President and CEO of the Urban League of Portland, told The Skanner News the “Ban the Box” bill is one of the most impactful bills for the Black community.

“A White young man with a high school diploma has better chances of getting an interview and, in fact, a job offer than does an African American man with the same level of education,” Harmon Johnson said. “If you throw in the barrier of having had a past of being convicted of a crime, that barrier is greater.”

Harmon Johnson said the bill will help people overcome their pasts and get people working.

Previous racial equity reports in 2011 and 2013 issued report cards for each legislator. The 2015 report does not give grades; instead it focuses on legislation and lawmaker voting records. Harmon Johnson said this new format invites people to take a closer look at the laws.

“We chose not to give grades this time around was because we didn't want folks to be fixated on their GPA when it comes to service for people of color,” Harmon Johnson told The Skanner News.

The racial equity bills had a lot of bipartisan support. There were bipartisan sponsors for major legislation to support English language learners, to increase access to 12-month supplies of contraception and to “Ban the Box” on job applications.

Harmon Johnson told the press conference this progress was good, but there was much more work to be done.

“Today is a day of celebration. It’s also a day for us to be thinking about ways to build upon our successes of 2015,” she said.

Harmon Johnson called for legislators to make sure these laws were implemented and to increase involvement from affected communities. She called on the community to elect more lawmakers from communities of color.

The report listed three bills that were not passed during the 2015 session the coalition would like to see in future sessions. House Bill 3517, the Cover All Kids bill, addresses current gaps in health care coverage for children. Senate Bill 894, the Comprehensive Women’s Health legislation would direct carriers to cover the full range of reproductive health services.

The Inclusionary Zoning House Bill 2564 was also classified as a missed opportunity in the report. The bill would have lifted the ban on requiring developers to provide affordable units in large construction projects.

Both Miller and Harmon Johnson spoke about Oregon’s changing demographics as part of the shift toward equity. One out of five Oregonians is a person of color and that number is expected to keep growing.