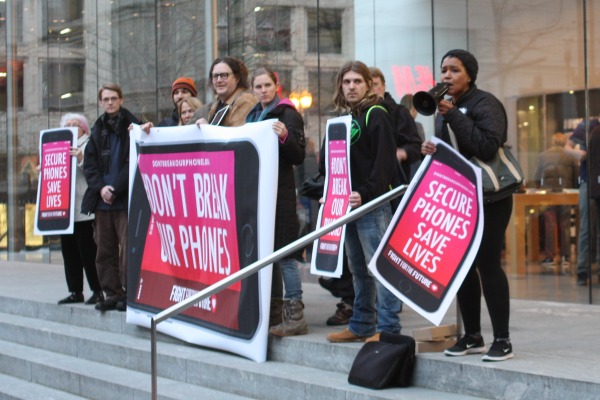 A small rally convened in front of the Apple store in downtown Portland. As participants stood on the slate steps in front of the glass walled and brightly lit shop, their shouts reverberated off the buildings around Pioneer Place.

Their insistent calls, repeated throughout the evening, were a plea: “Don’t break our phones!”

Members from the activist groups Don’t Shoot Portland and 15 Now held the rally to oppose the FBI’s order for Apple to hack their iPhones. The controversial legal battle has many privacy advocates and activists concerned about government spying on citizens.

Teressa Raiford, an organizer with Don’t Shoot Portland, stirred the crowd, urging them to hold on to their privacy and to oppose the FBI.

On Feb 15, U.S. Magistrate Judge Sheri Pym ruled that Apple needed to help the FBI hack the iPhone of Syed Farook. Farook, with the help of his wife, Tashfeen Malik, killed 14 people and injured 22 others during a holiday celebration in San Bernardino Dec. 2 last year.

The judge ordered Apple to supply software that would bypass iPhone encryption either through disabling the passcode or allowing the FBI to try an endless amount of passcodes until the phone is unlocked. iPhones currently have an auto-erase feature that wipes the phone data after 10 failed attempts.

In Oct. last year, Apple said it was impossible to unlock any locked phones running the iOS 8 or newer operating system. The Feb. order would force Apple to create a backdoor into the phone that could unlock any iPhone -- not just Syed Farook’s.

At one point during the demonstration a man shouted that the protestors were supporting terrorism. He continued goading the crowd as he walked, still screaming when he was a block away.

His counter protest was mostly drowned out by booing from the crowd and calls for the right to privacy.

Raiford spoke about the history of COINTELPRO activities to spy on political organizations. She mentioned the surveillance of Martin Luther King, Jr., Malcolm X, and John F. and Bobby Kennedy, who were all later assassinated.

Raiford knows she is being watched because of her Don’t Shoot Portland activism. She said she has organized protests where she wasn’t sure anyone would show up, and yet there was a large police presence waiting for her.

In Nov. of last year the Oregon Department of Justice came under fire for investigating people who used the hashtag #BlackLivesMatter on social media. The investigation profiled social media users as part of an assessment of potential police threats. Even the Director of Civil Rights for the State Justice Department, Erious Johnson, was profiled.

The ACLU of Oregon said this investigation was illegal -- state and local police cannot collect information about the political, religious or social views of any individual or group that is unrelated to a criminal investigation.

Sarah Armstrong, the outreach director of the ACLU of Oregon spoke in support of Apple standing up for personal security. She said the smartphones of today carry an enormous amount of information about our private lives; from conversations, to locations, to banking information and much more.

Armstrong said the new request of Apple is much different than previous requests for information. Instead of asking a company to hand over information, the FBI is asking Apple to hack and find information they never had access to.

She said the issue isn’t about accessing information, but the creation of a master key that could erode privacy security on an international scale. Armstrong said other countries and regimes will likely seek the same technology from Apple.

“Backdoors are uniquely dangerous, once the information is known, or a way to bypass the code is revealed, the encryption can be defeated by anyone with that knowledge,” Armstrong said.