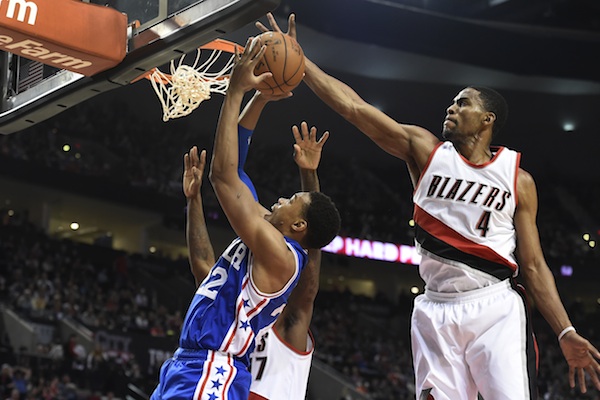 PORTLAND, Ore. (AP) — As usual, with the clock winding down and the game tied, the Portland Trail Blazers looked to their backcourt to save the day. The player who stepped up to make the save was unexpected.

C.J. McCollum converted a three-point play with 7.6 seconds left to break a tie and lift the Blazers to a 108-105 win over the Philadelphia 76ers on Saturday night.

Trapped in the corner near the sideline and the midcourt line, McCollum split two defenders, drove through the lane and hit a layup as he was fouled and stumbled to the floor, helping the Blazers avoid another embarrassing loss to the NBA's worst team.

"It was a great move," Portland coach Terry Stotts said. "We were debating whether to call a timeout or not (to avoid a turnover). It looked like he was OK. He made a good read."

Normally it would be Damian Lillard taking the last shot, but the Sixers double-teamed him, forcing a pass off to McCollum. Philadelphia rotated defenders to double-team McCollum, who then found a seam to get to the basket

McCollum finished with 25 points and five assists. Al-Farouq Aminu matched his career high with 20 points and grabbed eight rebounds for the Blazers, who lost by 25 at Philadelphia on Jan. 16.

Down by as many as 16 early in the fourth quarter, Philadelphia rallied to take a 100-97 lead with 3:10 to go behind a 13-0 run, capped off by consecutive 3-pointers from Hollis Thompson.

"I just felt like they played better than us to come back," said McCollum, who also tied his career high with five steals. "We didn't do a lot of things well, but we did enough toward the end of the game to withstand their run and finish them off." 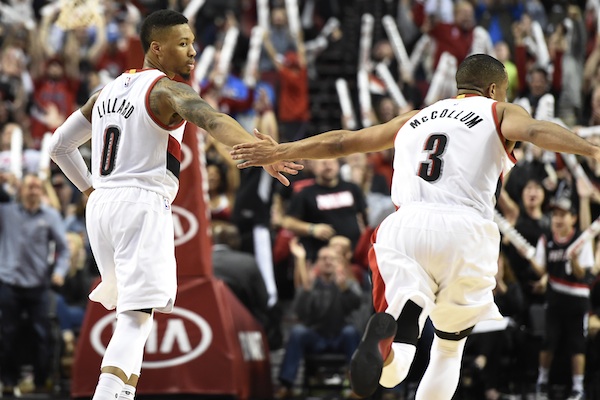 After falling behind, McCollum turned in a three-point play, followed by a Sixers turnover and a 3-pointer by Lillard to put Portland back in front with 2:36 remaining.

Another 3 by Thompson with 1:26 to go made the score 104-103, and after Maurice Harkless made one of two free throws for Portland with 46.5 seconds left, Ish Smith tied the game with a 15-footer with 23.4 seconds left, setting the stage for McCollum.

Jerami Grant missed a pair of free throws with 7.2 seconds left, and the Sixers were unable to foul to stop the clock.

"You walk away feeling like we could have stolen a win on the road," Philadelphia coach Brett Brown said. "I'm thrilled with their effort.

Smith had 17 points, a career-high 14 rebounds and nine assists. Thompson and Robert Covington also scored 17 for the Sixers, who have lost eight straight and 19 of 20.

Harkless had 16 points and eight rebounds for Portland, Lillard finished with 16 points and seven assists. Gerald Henderson added 11 points off the bench.

Grant scored 13 for the Sixers, and Carl Landry had 12. Nik Stauskas added 13.

Portland entered the game on a 4-8 stretch. In those eight losses, all on the road, Lillard shot just 38.7 percent from the field (63 for 163), well below his season average of 42.5. In the four wins, he was a much better 48.6 percent (36 for 74). Saturday he went 6 for 20 from the floor for 30 percent. From the free throw line, Lillard has been exceptional, win or lose, missing just four of his 87 attempts during that same stretch.

Minutes before he started his pregame media session, Stotts' alma matter, Oklahoma, defeated Oregon 80-68 to advance to the Final Four of the NCAA men's basketball tournament. Stotts, who was a Sooner from 1976-80 and an all-Big Eight selection his senior year, jokingly played the Oklahoma fight song on his phone for the assembled Portland-area media. Stotts was an assistant coach in Atlanta under current Sooners coach Lon Kruger, eventually earning his first head coaching job in the NBA when Kruger was fired in 2002. Oklahoma will play Villanova in the Final Four.

76ers: F-C Nerlens Noel missed his second consecutive game with a right knee injury. Brown said before the game that Noel will also sit out Sunday at Golden State. ... Reserves Richaun Holmes and Sonny Weems left the game after each played 6 minutes and did not return. Holmes strained his right Achilles and is doubtful for Sunday; Weems strained his right quadriceps and will be re-evaluated Sunday.

Trail Blazers: Portland improved to 15-3 in its last 18 games at the Moda Center, and 23-1 overall when leading at halftime. ... Harkless was drafted 15th overall by Philadelphia in 2012 out of St. John's. Before playing a game for the Sixers, he was traded to Orlando in the deal that sent Dwight Howard from the Magic to the Los Angeles Lakers and Andrew Bynum to Philadelphia.

UP NEXT
76ers: At Golden State on Sunday.
Trail Blazers: Host Sacramento on Monday.