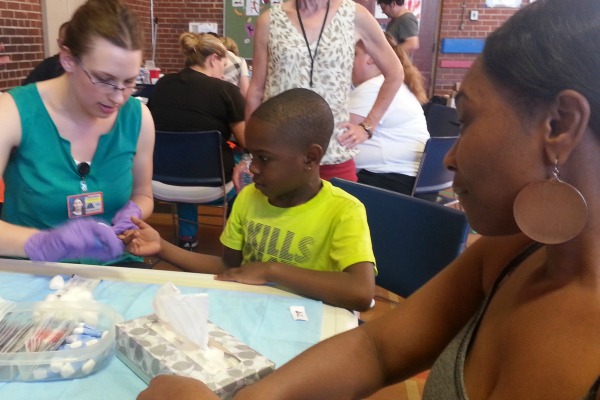 Students and parents line up inside the Rose City Park school gym. The children wander and play, making jokes about being “poisoned” while their parents sit, concerned and somber.

They wait until their number gets called and then walk past a partition to meet with Multnomah County health officials to test their children for lead exposure. The lead testing clinic is one of two large-scale testing events facilitated by the county in response to the recent public outcry regarding Portland Public School facilities.

Parents, teachers and education advocates have been upset and worried since the discovery of lead in the drinking water at Rose City Park and Creston Elementary Schools. The delay announcing the test results and revelation that PPS had been using the wrong kind of filter in schools has inflamed a firestorm between parents and PPS officials.

The firm will review the PPS systems and protocols relating to water testing and reporting.

PPS will undertake district-wide lead testing over the summer and will work to repair fixtures using certified filters that meet EPA standards for reducing lead.

Bri Williams brought her 8-year-old son, Samir, who attends Boise-Eliot Elementary, to the lead testing clinic. She was worried about his lead exposure and frustrated at the lack of communication from school district.

“I feel that the situation at hand should have been handled better as far as informing us of what was going on,” Williams said. “The tests were in March, we were just finding out in May. That is over a month and a half of not knowing.”

Outside Rose City Park, PPS and Multnomah County hold a press conference about the lead testing clinics being held at Rose City on Monday and Creston Elementary on Tuesday.

Dr. Jae Douglas, the Environmental Health Director at Multnomah County Health Department, said they will be able to test about 250 children and pregnant women that evening. They use capillary tests looking for at least 3.3 micrograms of lead per deciliter of blood.

Douglas said over 80 percent of lead poisoning cases the county has investigated has come from exposure in the home.

Lead can enter drinking water when lead pipes or pipe fixtures corrode. According to the Environmental Protection Agency, most common lead problems occur from brass or chrome pipes that have been welded with lead solder.

Low levels of lead exposure in children can lead to behavior and learning problems, lower IQs, hyperactivity, slowed growth and anemia. The EPA says there is no minimum safe level for lead in the water because such small amounts can affect human health.

“The home is the most common place where we see lead poisoning happening,” she said, adding that lead poisoning from schools would be an unusual circumstance.

If a child did have lead poisoning, Douglas said, he or she should first go to a primary care doctor to confirm it and then work to have the source of the lead removed. Chelation therapy, which removes heavy metals from the body, should only be used in extreme cases, according to Douglas.

After Samir gets tested for lead exposure, his mother and he return the gym waiting area. It takes eight to 10 minutes to get his result.

Williams said the news about lead has been eye-opening for her and it gives her more things to keep track of in her son’s education. She said it can be exhausting as a parent, but it is also a part of life.

“These are old buildings, and are they up to par? There are so many issues other than just the quality of education,” Williams said. “This is something else that you have to consider now.”

They met with a county official who has the test results: Samir had no measurable levels of lead. An immediate sense of comfort could be seen on his mother’s face.

That sentiment was likely shared by many parents that day. According to county officials, of the 225 tests that evening, only two children that were screened had elevated blood lead levels.

After getting his results, Samir ran down the hallway to leave, tired of being in school buildings all day. His mother was happy and wondered what the tests meant for the safety of Boise Elliot.