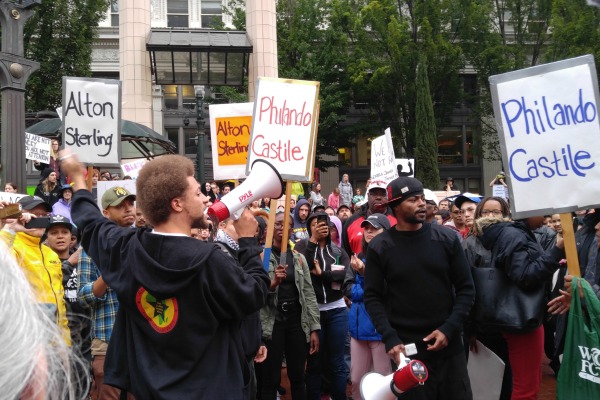 Demonstrators met at Pioneer Courthouse Square last Thursday and surrounded a group of speakers who rallied the crowd into action following two police shootings in Minnesota and Louisiana.

Don’t Shoot Portland’s rally, “This Can’t Be Justice,” drew more than 1,000 people by the end of the night.

One advocate was Joe “Bean” Keller, the father of Deontae J. Keller, who was fatally shot on February 28, 1996 by PPB Officer Terry Kruger.

Keller expressed frustration towards officers who are fearful and quick to use deadly force.

“I think if you are in fear for your life and you have to pull your gun, you need to quit your [expletive] job,” Keller said.

The demonstration was prompted by two back-to-back shootings – both caught on camera – that shocked the nation. On July 5, Alton Sterling was killed by two White Baton Rouge Police Department officers. Sterling had been wrestled to the ground by Officers Howie Lake and Blane Salamoni and shot multiple times at point-black range. Bystander video of the encounter quickly went viral, sparking protests and candlelight vigils.

The very next day, on July 6, Philando Castile was fatally shot by Officer Jeronimo Yanez after being pulled over in Falcon Heights, a suburb of St. Paul, Minnesota. Castile’s girlfriend, Diamond Reynolds, was in car as was her 4-year old daughter.

Reynolds live-streamed video of the police encounter after Castile had been shot, recording both his last moments and her arrest. By the following morning, graphic video had been watched more than one million times.

In Dallas, Texas, five police officers were killed at a Black Lives Matter-organized protest. The gunman, Micah Xavier Johnson, targeted and ambushed the officers. He then fled to El Centro College, where he was killed by a remote control bomb disposal robot.

The crowd then marched from Pioneer Courthouse Square to the Multnomah County Justice Center. Organizers called for Portland Police Chief Mike Marshman to meet with the protestors. Ultimately, Marshman did not talk with the protestors. The next day, he issued a statement to the Police Bureau calling for unity.

“As the nation reels from the events this week, in Portland we must come together,” Marshman wrote.

The protest had one incident of violence when a conservative blogger, who runs the right-wing YouTube channel “Laughing at Liberals” channel pulled out a gun and pointed it at protesters. Michael Strickland is known for showing up at rallies to insult protesters while filming their behavior and broadcasting on YouTube.

When Strickland approached the rally, a group of protesters walked toward him. Jeff Singer was among the group that met with Strickland. Singer told The Skanner News that someone grabbed Strickland and pushed him.

Strickland began to walk backwards, but then removed a gun from his side holster and swept it back and forth across the crowd, screaming “everyone needs to get the hell back.”

Organizers tried to diffuse the tension, asking Strickland to leave while holding protesters back to keep from engaging with him. The Portland Police Bureau arrested Strickland and charged him with disorderly conduct and menacing.

The next day, two felony counts of unlawful use of a weapon were added to Strickland’s charges. His bail is set at $250,000.

From the Justice Center, the protestors walked around downtown Portland, heading North towards Burnside Street and then West to 6th Avenue. Their numbers dwindled from 1000 to about 50 at the end of the demonstration.

The last 50 blocked the Morrison Bridge and faced a line of Multnomah County riot police, according to Singer, who runs the Hillsboro chapter of Film the Police. Singer said the two groups squared off, shouting threats and giving each other intimidating stares.

When the Multnomah County Riot Police were replaced by the Portland Police, the tension diffused as the demonstrators and police began to talk and joke with each other. Singer said a police commander gave him a CLIF bar.

“Then he handed me a Hershey’s kiss, saying ‘Here, you have a kiss from a police officer’,” Singer said. He saw other officers giving out trail mix and gummy bears on the bridge.

“It was a really strange experience how it went from aggressive standoff and threats of violence to a small party on the bridge,” he said.