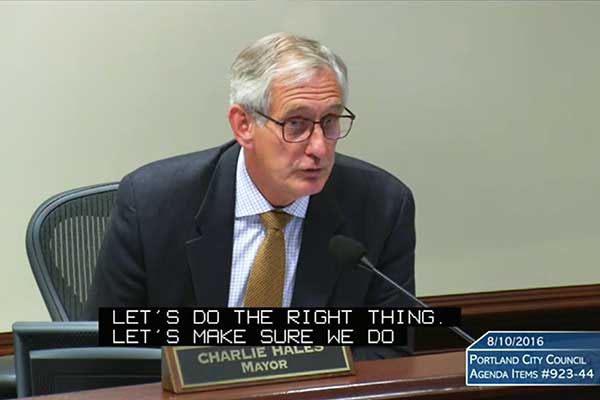 The vote allows private developer Homer Williams to begin planning for a $100 million homeless complex at Terminal 1. Williams has six months to create a plan for the Oregon Trail to Hope project, which is modeled after San Antonio’s Haven for Hope homeless camp.

Only a few years ago Williams was embroiled in a well-publicized fight to keep the homeless camp Right 2 Dream Too out of the Pearl District. On Wednesday, he testified to the council that helping the homeless was the responsibility of both city and business leaders.

“Our homeless is our problem. It’s a community problem and I think that it’s imperative if we are going to make progress that the public and private side need to both get involved,” Williams said.

The 14.5 acre site at Terminal 1 includes a 96,000-square-foot unheated warehouse. The first phase of the plan would turn that warehouse into a temporary shelter that could house up to 400 people. The second phase is the construction of a permanent shelter on the site.

Mayor Hales addressed the division in his closing remarks, saying that Terminal 1 is a response to the homeless state of emergency, requiring rapid action, deliberate experimentation and real money.

About 60 people gave testimony to the council. Many from the Pearl district were concerned about having a homeless shelter next door. Numerous others brought up the idea of using the empty Wapato Jail as a mass homeless shelter.

Members of self-organized homeless encampments testified against the development of the shelter. Terry Leight of the Hazelnut Grove community said the management, decision making power and information is centralized in the hands of a few city officials and developers.

Leight told the council that this concentration of power will ultimately harm the houseless if decisions are made without input from the most vulnerable.

“You are going to create systems of force and systems of violence,” Leight said.

Desiree Rose, also from Hazelnut Grove, likened the Terminal 1 proposal to a $100 million big high-rise prison. Rose said her community works hard to be good neighbors and to work with neighborhood associations, businesses and allies. But being forced to live in Terminal 1 would be internment to Rose.

“People who have shown us trust, we are willing to work with,” Rose said. “People who tell us ‘oh we treat you with respect,’ that’s a big slap in the face, and we know it. We will not go. Nothing about us, without us.”

Commissioner Fritz repeated part of Rose’s testimony as she delivered her rejection of the proposal. Fritz shared her experience working to rehome Right 2 Dream Too and the necessary time it took to work with communities and neighborhoods.

Fritz denounced the Terminal 1 proposal as being rushed and short-sighted.

“If we are going to get $100 million dollars from private contributors, we should be putting it into on-going housing and not into a mass shelter,” Fritz said.

Commissioner Fish gave the most scathing criticism of the project when he voted against Terminal 1. Fish said that he heard overwhelming opposition from the community and that he learned nothing about the plan, the funding or the city’s role in the program.

“If you don’t know where you’re going, any road will get you there,” Fish said before adding his interpretation: “Well, today, by this action, we are making a very big statement and it is that we are lost.”