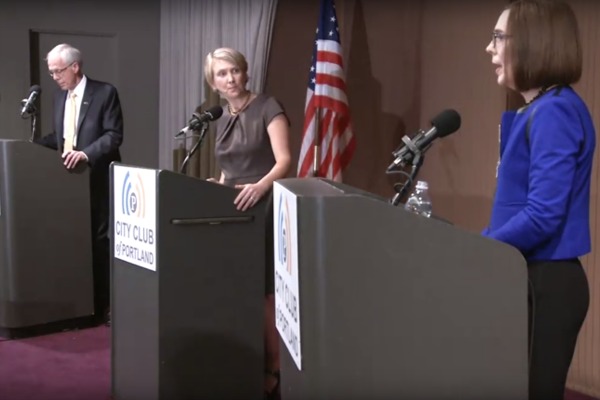 Governor Kate Brown and Republican challenger Bud Pierce squared off for a second time at the City Club of Portland on Friday.

The discussion between the candidates was a departure from the candidates’ polite and courteous, if occasionally spiky, conduct during the first debate in Bend Sept. 24. This time both candidates fiercely questioned the other’s ability to lead the state.

Pierce, the Salem oncologist, pitched a vision of governing that emphasized frugality, cost cutting and empowering job growth. He also took shots at Brown’s long political career and expensive government failures that were undertaken when she was Oregon’s Secretary of State.

“We see the Columbia River Crossing, $240 million -- no bridge built, we see Cover Oregon $300 million -- no website that works, and now we are going to give Oracle $500 million to fix our IT system,” Pierce said.

Brown, in contrast, portrayed herself as a progressive candidate who has created first-in-the-nation policies such as the Oregon Family Leave Act -- which allows family members to take time off to tend to family illness without fear of losing their jobs.

“Despite tremendous challenges this state has faced, I am so proud of the work we have been able to do together to move Oregon forward,” Brown said.

Pierce’s theme of market-based solutions fell flat when he responded to a question about domestic violence rates for Oregon women. The City Club crowd erupted in boos and gasps when Pierce said that well-educated women were protected from domestic violence and disparate pay rates.

“A woman that has great education, training and a great job is not susceptible to this kind of abuse by men, women or anyone,” Pierce said, he added that the best way to empower someone is through economic security.

Brown found herself temporarily without words to respond to Pierce’s claim. She told the audience that despite her middle-class upbringing, she was a survivor of domestic violence and she has been a professional making less money than her male colleagues.

Stacey Kafka, the communications director for Pierce quit his campaign about two hours after the controversial remarks, saying she was “greatly offended” by what he said.

Pierce later issued an apology to “Governor Brown and anyone else who may have taken my comments the wrong way.” In his statement he said any woman regardless of economic status can be a victim of domestic or sexual violence.

“A person who says a better education or a better job can cure these systematic problems has no business leading our state,” Piluso said. “Oregon women deserve leaders who recognize the ongoing domestic violence in our state.”

Piluso spoke from her experience as Gresham’s police chief where they would map out domestic violence complaints. She said all neighborhoods, regardless of economic status, had incidents of these assaults.

The remainder of the debate highlighted the differences between the candidates. Brown is a staunch supporter of Measure 97, the corporate gross sales tax measure on the November ballot. Pierce rejects the measure and favors streamlining government services in order to address the looming $22 billion PERS liability.

The candidates differed on reforms to the criminal justice system as well. Brown favors hiring diverse law enforcement officers, having diversity trainings and addressing disproportionate impacts for people of color.

“We are seeing great success with the criminal justice reinvestment act,” Brown said. “But I think there is more work that we can do to make sure that our laws are not impacting a people disproportionately.”

Pierce criticized Brown’s government solutions to criminal justice reforms.  Instead, his repairs focused on reducing recidivism rates. Pierce said the structure that prison provides can be used to train prisoners for work after release. He said this training should be paired with transitional programs that provide jobs to the formerly incarcerated.

“That is the issue that surrounds most of our social problems, the lack of meaningful work for too many citizens,” Pierce said. “The answer is the dignity of work. It brings people together, it ends despair and it creates a safer society.”

The one place that both Brown and Pierce showed ardent agreement was the denouncing of the effigy of Brown burned on the capitol.

Last month dozens of armed pro-gun protesters held a rally to advocate for open carry laws. The group held up a life-sized doll dressed to look like Brown and holding a warning sign for the governor. The group then set the figure on fire.

Brown was undeterred by the action.

“If these extreme groups continue to burn a mannequin of me in effigy every time I stand up for the safety of Oregonians, then they are going to run out of mannequins,” Brown said.

An image of the mannequin was captured by journalist Mike Bivins:

"Keep your laws off our rights Kate. 'The virus' (it's spreading)" #Oregonstandoff pic.twitter.com/p7Pyo8t63m