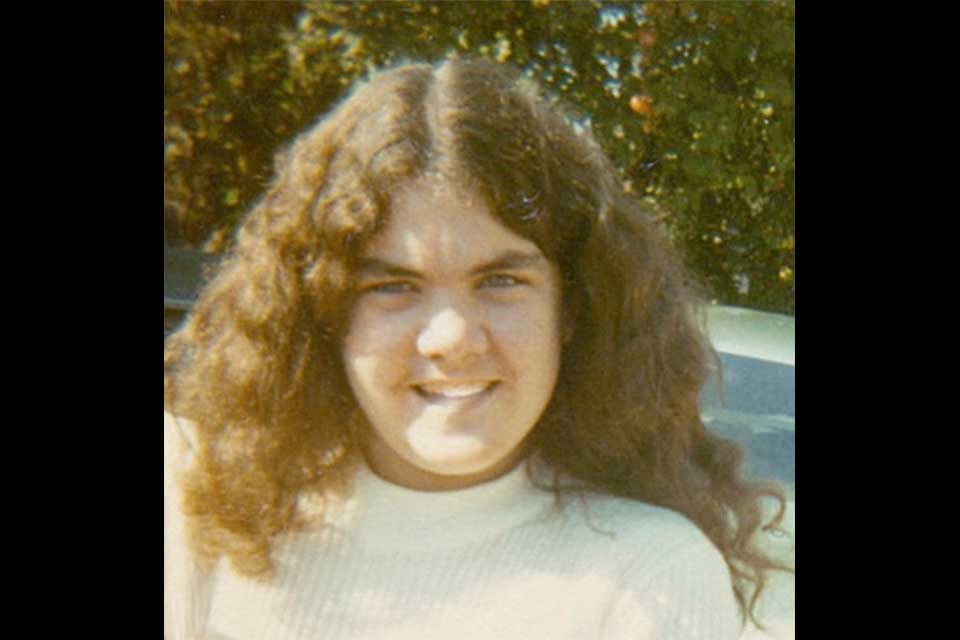 Martha Marie Morrison was just 17 when she disappeared. In October of 1974, hunters discovered a skeleton buried in a shallow grave in the hills of rural Clark County – which were positively identified with DNA testing as Morrison’s last year.

At the time of her disappearance, Morrison had been living in Portland with her boyfriend and had not been in close contact with her family, so relatives were not able to provide investigators with many details about her life. But deputies working with the Clark County Sheriff’s Office are asking for public help with the case – and specifically, they’re looking for more information about Morrison’s boyfriend at the time of her disappearance. Information released by the Clark County Sheriff’s Department’s cold case unit says her boyfriend -- who is described as a light-skinned African American man who was between five-feet-seven and five-feet-ten inches tall -- is not a suspect in the case.

“It’s been nagging us for 40-some years,” Clark County special deputy Dennis Hunter told The Skanner.

Morrison’s sister – who died, apparently of natural causes, shortly after Morrison’s remains were identified – told investigators that in 1973 Morrison participated in a job training program in Phoenix. There she met her boyfriend and the two of them moved to Portland, where her boyfriend is believed to have worked as an iron worker or welder in the ship yards. Morrison’s sister apparently met Morrison’s boyfriend when the two passed through Eugene on a bus trip from Phoenix to Portland, but was only able to provide a cursory description to investigators – and they couldn’t remember his name.

“In terms of a vague background picture, this is as vague as we’ve ever seen,” Hunter said.

According to information released by the sheriff’s office, after her disappearance Morrison’s boyfriend contacted her mother and father to ask if anyone had seen her. Family members said he told them that they had had an argument, and that a neighbor had told him he saw her leave with her belongings after they left for work. Her boyfriend then went to the Eugene/Springfield area to check places they had seen together during her visit. 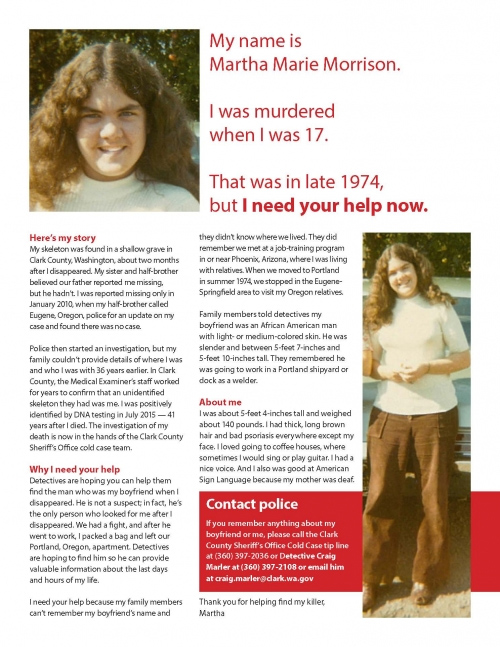 Flyer distributed. Courtesy of the Clark County Sheriff's office.A flyer distributed by the Clark County Sheriff’s Office and written from Morrison’s perspective says her boyfriend was “the only person who looked for me after I disappeared.” Investigators say family members have told them Morrison’s early life was tumultuous, resulting in her being placed in foster care as well as a stint at the Corvallis Farm School, from which she ran away. She was White with brown hair, weighed about 140 pounds and had bad psoriasis everywhere but her face. Family members remembered she enjoyed playing guitar and singing in coffee shops in the Eugene area, and that she knew American Sign Language because her mother was deaf.

The sheriff’s office is working in conjunction with the Portland Police Bureau’s North Precinct to distribute information about Morrison and her boyfriend throughout the North Portland area. Investigators don’t know what part of Portland Morrison lived in at the time of her disappearance, but have speculated they lived near the Swan Island area due to her partner’s job.

Hunter told The Skanner investigators are looking at other cases similar to Morrison’s to see if there may be connections between the crimes.

“In the period of 1971 to 1974, we have eight or nine cases of young girls either being homicide victims or disappearing and never being seen again, so we’re looking at all of those in conjunction with Martha’s case,” Hunter said. But without more information about Morrison’s case in particular, it’s hard to say whether there is any link between the cases.

Hunter said investigators are hoping a landlord, neighbor, coworker or someone else who may remember Morrison or her boyfriend will be able to come forward with a little more information about the case.

Those with information about Morrison’s case are encouraged to call the Clark County Sheriff’s Office Cold Case tip line at (360) 397-2036 or Crime Stoppers of Oregon at (503)283-HELP (4357). It is offering a reward of up to $2,500 cash for information leading to an arrest in my murder.